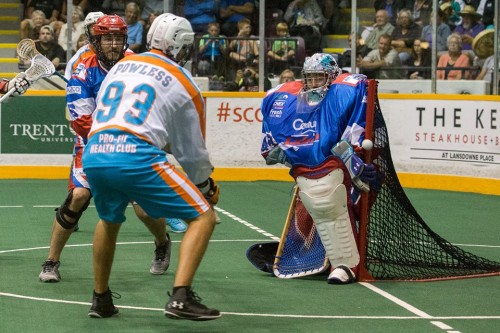 The first week of Major Series Lacrosse was a busy one with eight games over seven days. Four teams played three games each – and it’s only an 18 game season that stretches until the end of July! The season is young but the first week gave fans a good preview of the excitement to come in the strongest year the MSL has seen yet.

The Brooklin Redmen have publicly stated their goal is to host the Mann Cup this year and their first three games have shown they’re the ones to beat. After three games they sit in first place with five points. They beat Brampton in their home opener 12-5 and shocked the Lakers 11-7 the next night. The only team they didn’t get the better of was Cobourg, with whom they tied 9-9 in a barn burner. Shayne Jackson leads the league with 19 points over three games and youngsters Dan Lintner, Austin Shanks, and Ryan Keenan are proving to be the most dangerous forward core in the league. Zach Higgins has stood on his head. And they’re STILL expecting the likes of Mark Matthews, Mike Poulin, Curtis Knight, and Steve Priolo to return. Yikes. Their only game this week is a rematch hosting Cobourg on Wednesday night.

Last year’s champs, the Peterborough Lakers, struggled in their home opener losing 11-7 to Brooklin. Road wins over Oakville and Brampton have them at 2-1 with a solid four points from their first week. Shawn Evans and Adam Jones are leading the Lakers offensively, to nobody’s surprise, although fans can’t wait for Curtis Dickson to return next week, as the team seemed to lack some flair in their home debut. The Lakers have a bunch of new faces in their lineup that have already made an impact – Jake Withers is a huge improvement in the face-off circle, the only area the Lakers usually struggle in; Holden Cattoni has seven points, and Ian Llord endeared himself to fans on Thursday with some hard nosed defense. The Lakers only have one game this week, a home contest against Brampton.

The Six Nations Chiefs played only two games, defeating Brampton on the road 15-5 and then winning in overtime 11-9 over Cobourg in the Chiefs home opener. Letting Cobourg take them to overtime has to be a little concerning especially since they had a 4-0 lead after the first period. Dillon Ward played game one but the Chiefs had to rely on Warren Hill in game two so maybe some nerves hit the youngster in his first game. Cody Jamieson leads the team with 13 points and Randy Staats 11. They’ll be happy to get Dhane Smith and Ryan Benesch back soon, though, to held round out the offense. The Chiefs play a home and home this week against Oakville Monday and Tuesday but are then off for a whole week. The light schedule early in the season is a huge advantage for the Chiefs who don’t have to play many games with a short roster.

The Oakville Rock, while looking much stronger this season, may just be the unlucky ones this year. With Brooklin looking so strong and Peterborough and Six Nations right on track, the Rock just don’t seem to match up despite all the talent they possess. After two games they don’t have any scorers in the top ten; Wes Berg leads with eight points. Stephan Leblanc and Rob Hellyer don’t seem to have realized that the summer has started as they were pretty ineffective against both Cobourg and Peterborough. Against Cobourg, the Rock gave the Kodiaks an early 2-0 lead before storming back and winning 10-5. They only managed four goals in their own home opener against the Lakers. They host Six Nations Monday and then pay the Chiefs a visit Tuesday.

Surprisingly, it’s not the transplanted Cobourg Kodiaks in last place. Most expected the young team to struggle in their first season at the Cobourg Community Centre, but they put up great fights against Six Nations, losing in overtime, and Brooklin, with whom they tied, giving them one point along with a loss to Oakville in their home opener. Rance Vigneux played his best game against Brooklin, stopping the red hot Redmen offense. Captain Joey Cupido has been the ultimate leader for the team and they’ve even managed to get a player in the top ten in league scoring this week in Matt Crough, who had four goals versus Six Nations. The Kodiaks have great with attendance – over 1200 fans took in their first game and they had just over 1000 for their second. They play Wednesday in Brooklin before hosting the Excels on Sunday.

The Brampton Excelsiors went 0-3 in the first week with losses to Brooklin, Six Nations, and Peterborough. Brampton was without a starting goaltender as both Tyler Carlson and Anthony Cosmo (who may potentially play) were in the Champions Cup. Tye Belanger has gone out west. They relied on CLax goaltender of the year Jay Preece and Jr. A grad Quinton Martin, so it’s not wholly surprising they sit last at this point. Mike Burke’s running away with their scoring with eight points in three games. Dan Dawson had three points in two games but he’ll catch up quickly. The Excelsiors play two away games this week in Peterborough and Cobourg and aren’t home again until the 16th.