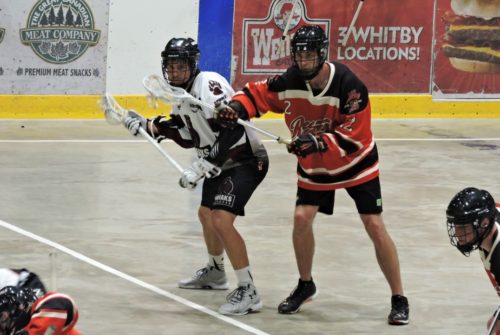 It took two games for the powerhouse Brooklin Redmen to get the best of the new kids on the block. The Redmen hosted the back end of a home and home with the Cobourg Kodiaks Wednesday night at Iroquois Park Sports Centre in Whitby and came out with an 8-6 win. The two teams previously tied 9-9 on Saturday in Cobourg.

Wednesday’s game started much like Saturday’s game, with neither team gaining more than a one goal advantage for the first half. There were some two goal swings, but the first two goal lead didn’t come until Steve Priolo scored at 18:23 of the second period. Derek Hopcroft broke a 5-5 tie at 16:39 and Priolo put the home team up heading into the third period. Dan Lintner extended the lead to 8-5 2:39 into the final frame. Former Redman Mike Triolo got one back for the Kodiaks late in the game but in the end, experience won the day.

The young Kodiaks club did very well keeping pace with the Redmen over two games. Saturday, the Redmen were without a good chunk of their roster who played in the Champions Cup. Those guys were back today – Steve Priolo, Mark Matthews, Curtis Knight, Kevin Brownell, Mitch Wilde, and John Lafontaine. Mike Poulin also made his debut between the pipes for Brooklin, stopping 36 shots.

Veteran Derek Suddons said the addition of the new faces was an easy transition. Suddens has played all four games this season, seeing guys like Lintner and Austin Shanks step up in the early going in the absence of some of the veterans.

“A lot of the older guys that have been with the team for a number of years aren’t afraid to speak up and let the young guys know and offer them some direction or insight on what to do on the next shift or what could have been played a little differently,” he said. “It all goes hand in hand with steering the young guys in the right direction and guys aren’t afraid to speak up and play together out there.”

Cobourg started Davide DiRuscio, returned from the Buffalo Bandits, and he also made 36 saves. Other than that, Cobourg continues to boast a roster with only one other mainstay NLL player (captain Joey Cupido) and a lot of CLax stars. Despite the perceived age or talent mismatch, the Kodiaks have been causing havoc so far this season. They took Six Nations to overtime, tied Brooklin, and were right in Wednesday’s game until the end. With the likes of Matthews and company back, nobody would have been surprised with a Brooklin blowout, but the Kodiaks aren’t planning on letting that happen anytime soon.

“We’re a young team and it’s going to take a little while to learn and get used to this level but
through our first four games we’ve been confident we can play with anyone especially on the
defensive side of the ball,” Cupido said. “We’ve got a lot of big guys, a lot of physicality and a lot of speed so we match up well with the teams in this league and offensively it’s going to come so we just gotta keep battling and worry about the process and not the outcome.”

The brightest spot for the Kodiaks has been their penalty kill. They killed five Brooklin power plays Wednesday while scoring three shorthanded goals of their own and lead the league with five overall – all scored against Brooklin. Pete Rennie took a pass from DiRuscio in the first period and ran the length of the floor to beat Poulin over the shoulder which at the time gave the Kodiaks a 2-1 lead. Down 4-3 in the second, Cupido and John St. John scored 33 seconds apart on the same kill to put the Kodiaks back up 5-4. Cupido broke away unassisted while St. John ran down two on one with defender Mike Thomas.

“We have some good players back there on our PK, three NLL guys and then Pete Rennie on the top so they focus and can take away a lot of stuff. They had three shorthanded goals tonight, so they’re doing the small things,” he said.

Cupido said the Kodiaks take care of their own end first “and as soon as we see the shot go off we’re up the floor. It’s a great way to get some chances because they’re just standing around and there’s no one high to protect it.”

MSL teams rarely have practice time so head coach Jamie Dubrick said he makes sure his players know the tendencies of the opposition’s offense before the game starts.

“We talk before the game and go through systems and how we’re going to stop them,” he said. “We know what their offense is and especially for power play you can watch and see what they set up with and we just go off that.”

Derek Suddons said the Redmen adjusted their game after the Kodiaks beat them shorthanded.

“Cupido is known for his fast break and speed and transition so they got a few off us that way throughout the game,” he said. “Credit to them, they played well on the man short, got a couple goals, created some opportunities. We wanted to shut down transition and penalties and people will tell you if you get into trouble with penalties or transition towards the third period they can cost you the game so there was a conscious effort to eliminate a couple of those items.”

Suddons said the Redmen are glad to have a new rival right down the 401 and respects the fact that although the Kodiaks are just beginning to build their team, they are still dangerous.

“It’s great when it’s hard fought, good clean lacrosse,” he said. “It’s really fun lacrosse to play. I think both sides would agree it’s enjoyable to work hard and play in those games. Cobourg’s coming along, obviously they’re a new team and they’re going to work hard, they have some structure over there that you can see is going to help their team. Every team in this league is good this year so if you take a night off it’ll come back to bite you so you have to be careful.”

Shawn Williams led the Redmen with four assists on the night. In his debut, Mark Matthews had a goal and two assists. Austin Shanks and Dan Lintner had two goals each. Single goals were scored by Steve Priolo, Derek Hopcroft, and Shayne Jackson.