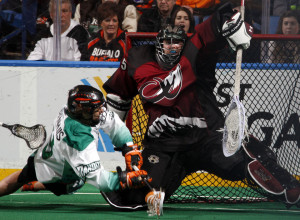 The NLL season started of with a bang on Thursday night when the visiting Toronto Rock marched into Blue Cross Arena and dominated the home Rochester Knighthawks by the score of 12-5. Friday night also saw the visiting team win in dominating fashion as the Colorado Mammoth defeated the home Buffalo Bandits 12-8 in a game that was never really that close. Having to start your season on the road, especially in Buffalo, where the Bandits had a 9-1 record last year and have proven to be dominate at home, is no easy task. The Mammoth handled the challenge with aggressive and athletic defensive play and sharp shooting on the offensive end.

The game started off a bit slow as both teams were trying to find their groove after a very short preseason. The NLL is unique in this way. Teams have basically two weekends to finalize their rosters and begin to build some chemistry on both ends of the floor. Early season wins are obviously important, but the challenge of everyone being on the same page can be difficult for any club. Colorado showed that being sharp right out the gate can earn you early victories in this league. The Mammoth coaching trio of Coyle, Gill and Stroup deserve a ton of credit for having their squad ready to go and focused to earn a road victory in game one.

The first quarter showed some nerves and some feeling out until Mammoth forward Chris Wardle opened the 2017 season with his first goal of the year about four minutes into the contest. Wardle is one of those players that teams tend to forget about until they look at the box score and he stings them for 4 points. With the added offensive power in the offseason players like Wardle will be able to take advantage of defensive units.

Speaking of defense, the Mammoth unit led by Captain Dan Coates was stellar Friday night. The philosophy that Pat Coyle has instilled in the defense showed as they were able to stifle the Bandit offense early as they extended their pressure to the boards and created early turnovers. The unit as whole is as athletic as any in the league. They are rangy, fast and physical and they kept the Bandits out of the middle of the floor, forcing them to take outside shots in hopes of beating net minder Dillon Ward. Ward is no secret by now. Coming off a huge summer season backing the Mann Cup winning Six Nations Chiefs, he saw some familiar faces on the other side of the floor and was able to frustrate his summer teammates early in the game from outside and in close. The Bandits were unable to beat him until early in the second quarter. The combination of the high pressure defense and Ward turning shots away allowed the Mammoth to hold the Bandits to only two goals in the first half. In shutting down the Bandit offense the Mammoth held league superstar Dhane Smith in check. Again this is no easy task as Smith is a fast, athletic, physical and proven goal scorer. If they Mammoth were going to go into Buffalo and fight for a win they needed to contain Smith, who was recently named the No.1 player in the NLL as picked by ILIndoor.com. The defense played out a perfect game plan and frustrated Smith from the start. He was rarely able to get his hands free for shots and when he did Ward shut the door. The defense held Smith to just three assists on the night. A huge effort and win by the back end unit.

As the defense was frustrating the Bandits shooters, the Mammoth offense was finding its groove. A lot of talk was made in the off season with the blockbuster trade that sent fan favorite Adam Jones to Saskatchewan in exchange for Rush forward Zach Greer. Both teams got a fair deal and it is still left to be seen if Jones will make an impact for the Rush, as Greer already has here in Denver. Greer made his presence felt early with his first goal and the Mammoth’s second goal of the game with a howitzer from the outside. Greer can not only shoot, he can feed as well. Multiple times he was looking cross crease to his teammates cutting off ball almost connecting with the high flying Callum Crawford for a couple of goals. As time goes on those two are going to connect on those feeds and create a nightmare for opposing defenses. Greer showed that he is able to take a leadership role with the Mammoth. His team has already voted him as assistant captain for his leadership qualities and he has embraced the role. It will create some exciting lacrosse this year with Greer in the lineup. He is tough and gritty and he is able to create his own shots as well as set up others.

The offense was sharp throughout the game and used quick ball movement and unselfish play to get to Bandit goal tender Anthony Cosmo. The Mammoth scored 3 goals in the first quarter and three in the second with tallies from Greer, Coates, Grant and Noble. All of their goals were assisted, which shows their willingness to share the ball to find the right shot. Going into halftime with a 6-2 lead allowed the Mammoth to take all of the momentum from the Bandits. Dillon Ward compiled an impressive 25 saves during the half leaving the Bandits looking for answers in the locker room.

As this is a game of runs, the Mammoth continued their offensive performance feeding off of the defensive effort on the back end and scored 3 goals in a row to start the third quarter. Defenseman Creighton Reid started things off and was followed by Jacob Ruest, a rookie scoring his first goal in his first professional game. He was able to beat Cosmo through the five hole off of a cross crease pass from John Grant. What a way for him to start his career. Asking a rooking to play his first pro game in the unfriendly confines of Buffalo is no easy task. He rose to the occasion and scored twice during the contest.

The third quarter also showed the continued brilliant play of Callum Crawford. He tallied twice in the quarter sandwiching a Bandit goal by Kedoh Hill. Crawford’s second goal of the quarter came on the powerplay. He threw a great fake to the backside and made both the defense and the goalie bite and buried in to the inside of the post. Crawford has shown he can score highlight reel goals on the crease but his outside shot is just as good. Bandit forward Ryan Benesch followed Crawford’s goal with his first of the night and the third quarter ended with a score of 10-4 and the Mammoth controlling the tempo on both sides of the floor.

As the fourth started you got the feeling that the Mammoth were going to start milking the clock during offensive possessions. This was not the case. 23 seconds in Greer ripped a shot from the outside that fooled the Bandit goaltender over the right shoulder hitting the crossbar, down and out. Play continued until the challenge flag was thrown by the Mammoth bench. It paid off as the ball in fact crossed the goal line before bouncing out of the net. This put the Mammoth up by 7 and they continued to put relentless pressure on Bandit shooters.

Buffalo did not give up as they went on a three goal run of their own in the middle of the fourth quarter. Colorado used the shot clock wisely during their possessions using up the entire clock before taking a shot or just rolling the ball into the corner. They seemed to take the foot off the gas as there were numerous times when transition opportunities presented themselves but instead of forcing the issue they used poise and awareness to get the offense on the floor to kill more time. The game at this point had a feeling of a comeback for Buffalo after their three goals in a row, until Reust scored his second of the night to stop the bleeding for the Mammoth all but ending the comeback hopes for the Bandits. Buffalo added one more goal at the end of the game with 52 seconds left.

Both teams are back in action next weekend. Colorado will open its home campaign on Jan. 7 at Pepsi Center against the Vancouver Stealth. Rhys Dutch and the Stealth always provide the Mammoth a challenge at home. Look for the Mammoth to come out strong defensively and use the same strategy they used against Smith to slow down Dutch and the Vancouver offense. With their physical athletic ability they should be able to create early turnovers and transition opportunities agains the Stealth. The new look Colorado offense will want to continue their early success and should find early opportunities against a team that was not in action the first weekend of the NLL season. Vancouver will need some time to get to game speed and this will give Colorado and advantage along with playing at home in the “Loudest House” in the league. The action kicks off at 7 p.m. mountain time at Pepsi Center.