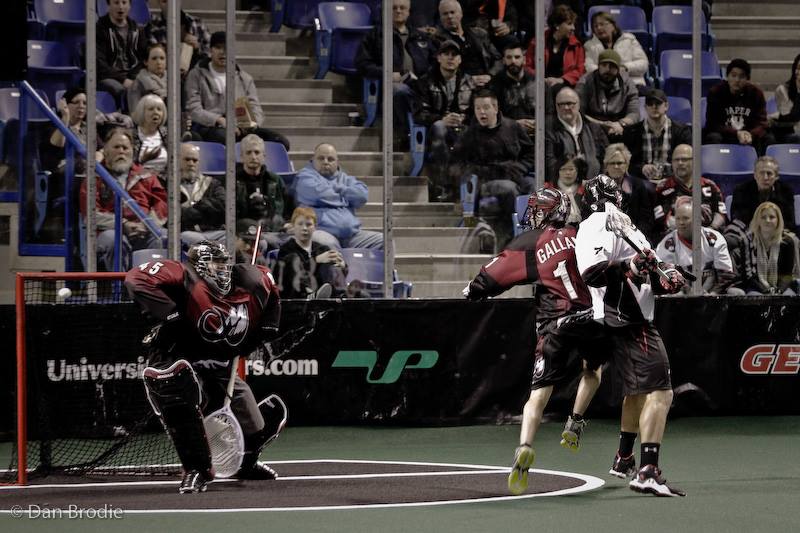 The Colorado Mammoth didn’t dominate the stat sheet, but they did dominate the scoreboard, beating the hometown Vancouver Stealth 15-8 in their season opener.

The Stealth got off 56 shots on Mammoth goalie Dillon Ward, but were unable to consistently beat him, getting shut out for the entire second quarter. At the other end, Tye Belanger got lit up for 14 goals on only 37 shots before being replaced late in the third quarter by Brodie MacDonald, who had a good relief stint, giving up just one goal on nine shots.

Statistically, Vancouver had a decisive lead in shots with 56 to Colorado’s 46, and Colorado won in the category that matters most, goals scored. Virtually every other team category was a dead heat, with both teams matching each other very closely in faceoffs won (14-13 for the Stealth), loose balls (53-51 for the Mammoth) and powerplays (3-1 for the Stealth, with neither team scoring on the man advantage).

After getting behind early, Colorado tied the game up late in the first quarter with two quick goals. After that, they broke the game open in the second quarter by scoring two shorthanded goals, followed by two more even-strength goals, all in the last seven minutes of the period.

In his first game with the Mammoth, Ryan Benesch led the way with a game-high eight points (two goals, six assists), while Chris Wardle had a four-goal night and added an assist in the win.

Vancouver travels to Calgary next week to face the Roughnecks, while the Mammoth have a bye week before hosting the Georgia Swarm on Dec. 23.