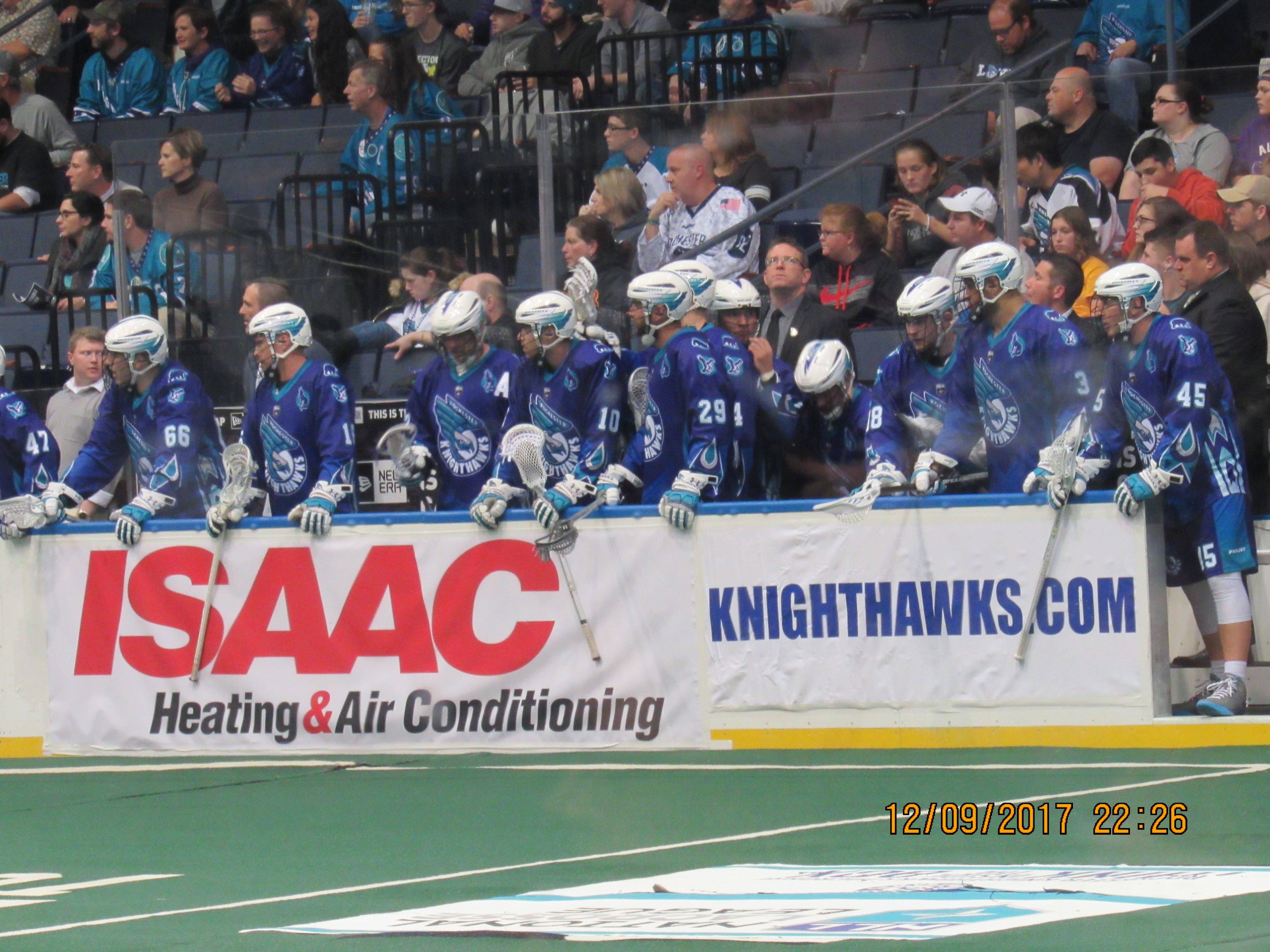 The Rochester Knighthawks (1-0) opened up their 2017-18 campaign with a very decisive 17-6 thrashing of the Calgary Roughnecks (0-1) in front of 4,596 at Connors & Ferris Field at The Blue Cross Arena on Saturday night. The victory was also the 200th in the franchises’ history.

Dan MacRae got the scoring going early at 1:08 to give Calgary their only lead of the game. Kyle Jackson (2G/1A) would score twice, his second off a beautiful give-and-go with rookie Eric Fannell (3A) as Jackson dove across and put the ball past Scigliano, and Rochester had a lead they would not relinquish.

The turnaround point of the game came early. At 9:02 Cory Vitarelli was called for holding, but to the fans it resembled a linebacker sacking the quarterback. Rochester would spend the next 5:03 span shorthanded with two more penalties. During that time, the Rochester defense held Calgary scoreless and netted a shorthanded goal by Luke Magnan to end the first quarter with a 3-1 lead.

Rochester would then go on a scoring tear by tallying eight times in the second quarter with two separate four goal runs. The Knighthawks kept Calgary scoreless for the next 22:13 as they built a 7-1 lead, and at the half the Knighthawks had a commanding 11-3 lead.

Cody Jamieson, who returned to action after having season-ending knee surgery early last season, recorded his 200th career goal at 11:01 of the second quarter.

“I didn’t know what was going on,” Jamieson said. “I heard the guys yelling, ‘get the ball!’” Jamieson went on to say that “it’s a testament to the guys I have played with to score this many so far in my career.”

Both teams played a fast-paced third quarter. Despite a lot of rushes and chances by both teams, only one goal was scored when Scott Campbell beat Christian Del Bianco at the 11:37 mark. Rochester scored four more in the fourth for a 16-3 lead. Calgary broke another scoreless run, this time of 23:42, when Greg Harnett popped the ball past Vinc. Calgary would score twice more, and Rochester’s Dylan Evans would net one to make the final 17-6.

Tempers did come to a boil as Rochester’s Paul Dawson and Calgary’s Chad Cummings squared off with Dawson getting a slight victory.

Goaltending woes continue for Calgary. Frankie Scigliano got the start and was pulled briefly at 5:42 of the second quarter for Del Bianco. Before the night was over their lines would almost be similar. Scigliano stopped 19 of 29 shots in 25:34, and Del Bianco stopped 15 of 22 shots in 34:26.

The other problem in this game for Calgary was Curtis Dickson’s two shots and Dane Dobbie’s 13 shots combined for a total of one assist only. Rochester’s defense was all over them, not allowing them to get into the lanes or extend their arms. If they did, the defense made sure Matt Vinc would see the shot clearly.

Jake Withers, Rochester’s first round pick and number two pick overall in this years draft played fantastically. Withers was 18 for 22 on the face-offs and picked up 10 loose balls in his debut.

Dan Dawson, who had three goals and three assists said after the game that the Knighthawks “want teams to know if [they’re] coming into this barn, [they’re] going to be in for a battle.”

Dawson was one of 11 different players that scored for Rochester. Joe Resetarits, Cory Vitarelli, Josh Currier and Kyle Jackson all had two goals. Resetarits needs only one more goal for 100 in his young career.

Winning goaltender and star of the game Matt Vinc stopped 40 of 46 shots faced and also picked up a modest three assists.

“I was really seeing the ball well tonight,” said Vinc. “The guys made sure the lanes were cleared and we limited their second chance opportunities. When you do that it makes the game easier.”

Rochester outshot Calgary 51-46, 76-69 on loose balls and held Calgary 0-4 on the power play, while also getting a shorthanded goal. Rochester was one for two on the power-play.

Calgary (0-1) will open their home schedule on Friday, December 15th as they will host Vancouver (0-1).

Rochester (1-0) will have the week off and prepare for the Buffalo Bandits (1-0) to come into town on December 23rd.