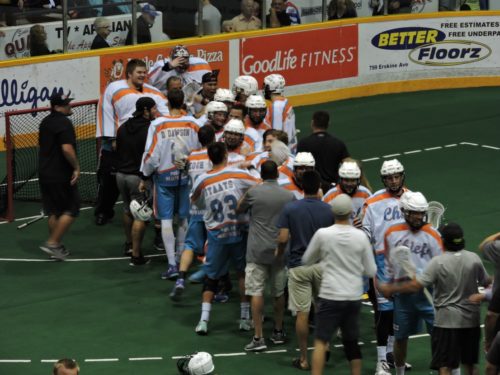 They’re calling it the “reverse sweep.”

When the Six Nations Chiefs completed their improbable comeback from an 0-3 deficit to the Peterborough Lakers in the MSL final this past weekend, they made history.

No senior Ontario lacrosse team had been down three games in a series to come back and win four straight games until 2016. The Chiefs looked down and out after game three but an 8-1 win in game four plus the return of Cody Jamieson propelled their momentum and the Lakers couldn’t match their sustained intensity.

The Chiefs will host the 2016 Mann Cup beginning this Friday, September 9. They will play the Maple Ridge Burrards, the Western Lacrosse Association champion.

“The guys never folded, it was never ‘oh dang’ or hung shoulders,” Chiefs coach Rich Kilgour said. “We knew we were in tough. You lie to everyone but yourself. We said let’s have one good period and build from there and then we had probably 12 good periods in a row and here we are.”

The Lakers and Chiefs have gone back and forth for the last three years. It has become tradition for the visiting team to take game seven. The Chiefs won in 2014 at the Memorial Centre and the Lakers won in 2015 at the ILA.

The Lakers are absolutely disappointed in the result, especially after having a 6-4 lead in the second period of game seven. The Chiefs erased that with a five goal run. It’s especially heartbreaking for fans in the ‘Boro knowing their Lakers had three chances to finish the Chiefs and couldn’t do it.

Lakers star Shawn Evans was visibly emotional after game seven – disappointment, anger, confusion, he and his teammates felt it all.

“Two years ago [the Chiefs] did the same thing,” he said. “We couldn’t battle back. When all is said and done the outcome is the outcome. I think we had the energy to win tonight. We had the lead for two periods and we just couldn’t close the game.”

In 2014, a six goal third period run from the Chiefs sank the Lakers.

Since then the Lakers have made many roster changes. They looked to be more cohesive than ever this season, on and off the floor, but in the end the Chiefs just outplayed them.

Evans didn’t mince words when asked what had gone wrong.

“I think the will to win and the lack of veteran players [made the difference],” he said. “I don’t want to say that, but I don’t know if [we] thought we were up 3-0 and it was just going to get handed to us. Everyone was just tasting that next week and not realizing that they have to put the effort in to get there and I thought we were more watching than playing.”

Despite playing so well as a team, the Lakers stars like Evans, John Grant, and Adam Jones were conspicuously quiet during the latter half of the series. Whenever one of them tried to put the team on their back, it backfired. Meanwhile, the Chiefs mastered the ability of supporting their big guns. Most of them had big moments and there were several viable candidates for the Johnny Shooter Davis MVP award.

“It takes 25 guys to win. Everyone on our roster plays,” said Kilgour.

Jamieson ended up with six goals and five assists in the games he played. He’s awaiting knee surgery but strapped on a brace to help his team. He was limping while accepting the Everett Coates Memorial Trophy after game seven.

“He warmed up for game four and we were like ‘look at the Peterborough bench’. And I mean everyone was looking down wondering ‘is he going to play, is he going to play’?” Kilgour said. “It kind of got in their head a little but it also gave our guys a big boost. When the best box lacrosse player says ‘I’m going to do this for the team’, with not a selfish bone in his body, and he lines up, that makes you be a lot more honest as a lacrosse player. Enough can’t be said about him. He scored a big goal in game four, he had a goal and a couple of assists in every game on one leg.”

Dhane Smith led the Chiefs in scoring with 19 goals and 22 assists throughout the playoffs. Dan Dawson was just one point behind with 13 goals and 27 assists, and used his experience against the Lakers with Victoria last season to get under their skin.

Eighteen year old call-up Austin Staats was fifth in playoff scoring with 33 points. Staats plays for the Jr. A Arrows, who were eliminated earlier this summer making him available to the Chiefs.

Even more remarkable than his point total is Staats’ ability to play though seemingly any injury. Throughout the series he dislocated his shoulder twice and rolled an ankle—and those are only the injuries fans knew about having seen them happen.

Staats didn’t hesitate for a second in coming back from all his injuries, earning him the nickname “crash test dummy” from the Chiefs coaching staff.

“Pressure comes along with the big games and a good player always wants to be in that pressure situation,” he said. “If you don’t like pressure situations you shouldn’t be in this game or you shouldn’t be playing at all. You do whatever you can to get a championship and I don’t have one of those this summer and I want one. I lay my body on the line for it and that’s it. After [the Arrows] got swept, I didn’t think I’d be picking up a stick again… but I was lucky enough to get called up by the Chiefs and I did my part while I was playing.”

Staats is already impressing NLL scouts but after the Mann Cup he’s off to Onondaga Community College to start his school career.

All those Chiefs were impressive, to say nothing of defensemen like Billy Dee Smith, Sid Smith, Dan Coates, and Paul Dawson, who shut down the Lakers offense like it was the easiest thing in the world. They limited the Lakers shots and kept them to the outside.

That stellar defense is what allowed MVP Dillon Ward to do his job. Ward got the MVP nod from a vote by media in attendance during the series. He stopped 524 shots over two series and ended with a breathtaking GAA of only 7.02. Most impressively, he held the Lakers to just 21 goals in the last four games.

“Wardo’s a big guy, he plays the angles right and just kept soaking them up,” Kilgour praised. “He made some incredible saves. The first two games he was awesome, and everyone had a bad game three. He kept his head up, kept his chin up and we made a couple of little adjustments on D and he got to see the ball better and took care of business and believe me, he deserves that trophy.”

The Chiefs had nearly a week to prepare for the Mann Cup.

Kilgour hoped to get in one or two practices during the time off.

“Nothing hard,” he said, “but we’ll just make sure we’re on the same page. I’ll do a little scouting on the Burrards. They’re a pretty big and mean defensive team. Out west is really high paced lacrosse. I’m going to try and get my hands on some film and stuff and start going over what they try and do and how were going to try and stop them.”