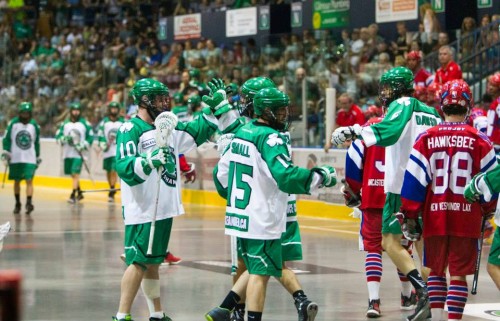 Today was an off day, so there was no game to watch. Most of the fans went sightseeing. I walked around downtown Victoria with my dad for several hours, visiting Chinatown, the Empress Hotel, Miniature World, and the inner harbour area. Being by the water was so peaceful. It was so obvious how much of a tourist destination Victoria is—there were about eight shops between our hotel and the harbour on one street all selling the same souvenirs!

The fans are moving on Monday afternoon to the same hotel the players are staying in, and most of us can’t wait. Personally I can’t wait for a stable internet connection so I can update more reliably!

Some of the Lakers went salmon fishing, and some went golfing. The theme of the day was just to rest and enjoy themselves before a big game three on Monday night.

The Lakers will be without Adam Jones for the rest of the series as he has flown back home to begin his first teaching job, leaving a hole on the Lakers left side.

“He’s one of our better players and that’s a big loss for us but we have the bench to take care of us,” said Curtis Dickson. “We all believe in each other, it doesn’t matter who’s out there, we know any of us can put the ball in the net at any time.”

Jones had five goals and four assists in the two games. He was third in scoring for the Lakers in both the regular season and playoffs, so whoever steps into his shoes has a big hole to fill.

“It’s going to be next man up,” said Chad Culp. “It sucks that we’re missing him but the next guy is capable of doing it, so we just need a team effort and everybody’s got to keep going. We’ll miss him for sure but hopefully we’ll pull this one out for him.”

The Lakers have several options to replace Jones. Junior A standout Holden Cattoni will join the team Monday, and the Lakers have Scott Evans and Josh Currier they can insert into the lineup as well. Evans, while he has a wicked shot, is not as fast as some of the younger guys who replaced him late in the Six Nations series and in game two of the Mann Cup.

Dickson’s sentiment about the players all believing in each other is comforting. This version of the Lakers is probably the closest-knit I’ve seen in several years. When guys go to the line for each other, good things will happen.

The Shamrocks have the second biggest crowd I’ve seen at a senior lacrosse game, second only to the Lakers. A couple thousand fans have packed The Q Centre each game so far, and like Lakers fans, all seem to be very knowledgable about their lacrosse, something captain Scott Ranger agreed with after game two.

“They’re phenomenal,” Ranger commented. “We disappointed them tonight unfortunately but they’re great fans, they know the game very well. It’s similar to Peterborough right, they know lacrosse, they love lacrosse and you can see how they support us when we’re playing well and they’re not afraid to boo when we’re not playing well. All the power to them because we were awful tonight.”

While as a Lakers fan I’m not used to being drowned out when I cheer, I love seeing the same passion for the sport in other places. It’s amazing to know that this sport is just as revered as it is in Peterborough, straight across the country.

Ranger said his team has to play through the adversity caused by losing by such a large amount in game two.

“It’s extremely difficult to play though those penalties,” he said. “We just want to play lacrosse, but it is what it is. We have to also set the tone but we feel like we’re getting chopped, they feel like they’re getting chopped but it’s the Mann Cup, so we just have to suck it up and play through this little adversity, but adversity builds character. We have a lot of characters in that room so we have to man up and play lacrosse on Monday and it might be a different story at the end of the night but if we play like that again they’re going to hang one on us because they’re a good team.”