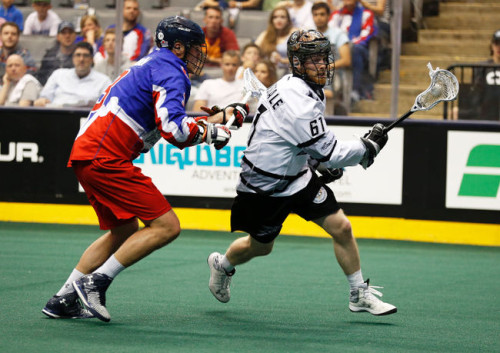 Matthew Dinsdale was acquired by the Edmonton Rush from their arch-rivals, the Calgary Roughnecks, at the trade deadline in exchange for a third round draft pick later this year.

Little did either team know that Dinsdale would go on to score the Champion’s Cup winning goal in Game 2 of the finals, sealing the Rush’s first ever title.

That goal capped what turned out to be the best season of Dinsdale’s short career. Up until this point, as a part-timer with Calgary the former first round pick had never played in more than 14 games in a season (2014) and in that year notched 17 points while also winning eight of 23 faceoffs as the backup drawman to Geoff Snider.

This year Dinsdale had picked up a point per game in six appearances with Calgary. The reality was that he likely was never going to be more than a secondary option with the Roughnecks—as a right-handed shot he was competing for floor time with Shawn Evans and Curtis Dickson, two players that don’t miss a lot of shifts in Calgary’s offensive set.

When he was sent north to Edmonton on March 31, it gave Dinsdale an opportunity to take on a larger role. With the big threats being on the left side—Mark Matthews and Zach Greer—the Rush provided a better opportunity for Dinsdale to show what he’s capable of and to create space for rightie snipers Robert Church and Ben McIntosh.

He took full advantage of the chance, equalling his season-best performance in his first night with the Rush by scoring twice and adding an assist for three points. He had another three-point night two weeks later and a four point night the week after that.

Going into the last game of the season, Church was injured and unable to play, giving Dinsdale yet more opportunity. The result was three goals and four assists for the Coquitlam native, an outstanding night by any standards.

Carrying that momentum into the postseason, Dinsdale would have a four-point game against his former club, the Roughnecks, in Game 1 of the Division Finals while Church still recovered from his injury. With Church back in the lineup the following week, Dinsdale’s role was reduced again, but he continued to put points on the board, notching three more points between Game 2 and the tie-breaker, helping the Rush to their second finals appearance in four years.

Against the Toronto Rock in the Champion’s Cup, Dinsdale continued to produce, racking up three points in both games. But none of those points were more important than his only goal of the finals. With 1:02 left on the clock in the fourth quarter and the game tied, he was able to beat goalie Brandon Miller, assisted by Church and Matthews and giving the Rush their first Champion’s Cup.

It may be a bit of a stretch to say that Matthew Dinsdale was the secret ingredient that put the Rush over the top and earned them the championship. On the other hand, in 10 games with the Rush this year—five regular season and five playoff games—the Rush went 9-1 with Dinsdale contributing 32 points in those 10 appearances.

And there was also that Champion’s Cup winning goal.