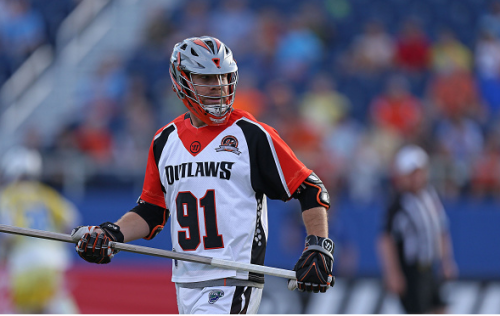 Halfway through the 2015 MLL season the Denver Outlaws are limping into the All-Star break. At the beginning of the season it seemed that Denver would function more like their mascot and simply reload this season. Yes, Lee Zink was a big loss, but the rest of the team was pretty much intact. The team just had to survive the absence of its NLL talent and then all would be right with the world.

Well things haven’t worked out as planned for the defending champs. They currently sit at 4-4 on the season, in the midst of the logjam in the middle of the standings. One of those losses included a drubbing at home at the hands of the Ohio Machine, which was Denver’s second loss at home since the 2012 season. If that’s not a red flag, please feel free to offer something better.

Let’s take a look at the team’s various units and see if we can hand out some midterm grades.

Eric Law makes this team go, or at least he did last year. Hampered by injuries in the offseason, the Law didn’t seem to be himself in the early weeks of the season. Just as his partner in crime, John Grant, Jr. returned to the fold, Law found himself on IR. No Bueno for the Outlaws. Of course, Grant continues to be a major point producer and seamlessly stepped onto the grass at Mile High from the floor of the Pepsi Center.

Both offensively minded Bocklets (Mike and Chris) have played well this year. No complaints there. Greg Melaugh showed that he can play in the bigs before the cavalry returned for Denver and is a player they should want to keep in their wheelhouse. Dan Taylor got runs in a couple of games and provided a big body with soft hands, but ultimately was relegated to the practice squad.

It’s difficult to find fault with the play of Drew Snider and Jeremy Sieverts, as they’re leading the team in scoring. Sieverts’ 2-point tallies are way down this year, however, with only one through eight games. Everyone assumed the return of the grippy ball would be a boon to the former Terp, but that hasn’t proved out thus far.

All told, the Outlaws’ midfield has played well. The team expects middies to play on both ends of the field. LSMs Matt Bocklet and Michael Simon are definitely strong points for Denver between the lines, as well.

Unless there’s a shift I didn’t notice, MLL continues to be a midfield fueled league. That’s why it’s a bit concerning for the Outlaws that there’s a sizable gap between their third highest scoring midfielder, the under-appreciated Justin Pennington, with nine points on the season. To offer a bit of context, Greg Melaugh has nine points on the season and only played in the first four games.

The rest of the midfield needs to step up on the offensive end of things.

Anthony Kelly has taken every single faceoff for the Outlaws this season. He is 146-242, winning 60 percent of his draws. That’s pretty good, eh? The wing play has been solid as well, notably with Matt Bocklet and/or Ken Clausen getting runs there as of late.

Maybe it’s just me, but Kelly’s decision-making after winning the draw could be a bit more consistent. I haven’t done a statistical analysis but it seems like once or twice per game he wins the draw and then throws the ball away on an errant pass (sometimes not even looking where it’s going) or some other bad turnover. With a stellar defense this wouldn’t be as big of an issue, but sloppy post-draw play doesn’t help when the defense is struggling.

Dillon Roy has emerged as the leader of this defense and he’s the best close defender on the team. Without Zink as the defensive anchor Roy is playing less feral this year than last; that’s both a good thing (fewer penalties) and a bad thing (less defensive grit).

A healthy Ken Clausen has been a solid boost for the team; one gets the impression he’s a great clubhouse guy, too. Max Schmidt has played well, but not spectacularly. The same goes for Chris O’Dougherty.

Denver is the only team without a close defender representing them at the All-Star Game. A solid case could be made for Roy as a snub, but that’s about it.

With the defense struggling, Denver needed a field general in goal to bail them out. Jesse Schwartzman as done so on a couple of occasions this year, and played well in a couple of losses too, but the stars on his uniform are looking a bit tarnished this year. Schwartzman is having his worst statistical year as a pro. He got the nod for the All-Star Game, but I would suggest that was more a product of his body of work and not because of this season. His outlet passes are still a thing of beauty, but he doesn’t appear to see shots well this year and I can’t think of the last time he made a high-energy stop. That’s not a good thing for your all-time great goalie.

Dillon Ward started one game and got shellacked against Chesapeake. Of course, that happens when your defense lets the other team walk to the front of the net and shoot. I’m not ready to round up the angry villagers for Ward yet. His relief work in the first meeting against Chesapeake game is more of what I’d expect to see from Ward.

Johnny Rodriguez has only played in two games, and his sample size is even smaller than Ward’s. He looked good in the second half against Chesapeake last week though.

Four of Denver’s final six games are at home (Rochester, Boston, Florida, New York), which should be good for a team that tends to play well at home. The other two match ups are at Charlotte and at New York. Denver needs to get off the snide and re-group during the All-Star Break if they want any hope of making the playoffs this year. Peaks and valleys are okay during a season as long as the team peaks as the right time. Now that we’re at a point where teams have access to their full rosters Denver’s recent struggles need to be the last valley of the year.