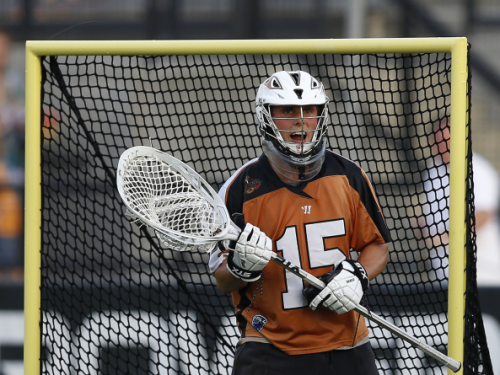 the action of saving or being saved from sin, error, or evil.

There is an old saying that everyone loves a good redemption story. Good guy makes a bad mistake, people begin to doubt him or write him off, but he is able to overcome the issue and everyone feels good again. This type of situation occurred in Major League Lacrosse over the last couple of weeks. The person in mind was Rochester Rattlers goalie John Galloway.

Galloway is a two-time National Champion at Syracuse, won a New York state championship at West Genesee High School, one of only two goalies to ever be a Tewaarton finalist, MLL Goalie of the Year in 2014, MLL All-star, and member of the United States National team. He has also led the Rattlers to back-to-back MLL championship game appearances over the last two seasons. With a background like this, it was stunning to see Galloway be on the wrong end of the most talked about lacrosse goal in the last decade when Brodie Merrill tossed up a 92-yard prayer that somehow got past the star goalie. What made matters worse was the Rattlers had a bye week so Galloway was left to think about that goal and the fact that the result was an 0-3 start for his team. The social media world spread that goal around as even non-lacrosse fans wondered how that ball got by a professional goalie.

But, funny thing happened on the way to John Galloway’s demise. Galloway had a vintage Galloway game leading the Rattlers to their first win of the season Saturday night in their home opener against a strong shooting Chesapeake Bayhawks team. Playing in only his second career game at Wegman’s Stadium at The Aquinas Institute, the Rattlers home venue this year after playing a playoff game there a few years back, Galloway made some impressive saves down the stretch to preserve the win. More importantly, he faced down his demon. Kyle Sweeney tossed up a shot from about 75-80 yards away at the end of the 3rd quarter. Here’s what happened:

(Excellent analysis by this announcer!)

Galloway made the stop and then poked a little fun afterwards by talking to the ball, pounding it to the ground, and kicking it. If you look closely, you can see Galloway smile as he gets a pat on the back from Mike Manley and John Lade. Galloway has come full circle now and can put the Merrill shot behind him. If I was a betting man, I will put all my chips to the middle that Galloway ends the season as one of the top two goalies in the MLL keeping Rochester in the playoff picture and possibly a third straight trip to the championship game.

Jesse King, Rochester. Rochester’s first round pick from a year ago had a breakout performance in just his second career game leading the Rattlers to their first win of the season with five goals and two assists.

1- Ohio (4-1) Currently have the league’s best offense and defense.

2- Charlotte (3-1) Much needed weekend off should have them ready this week.

7- Denver (2-3) Can they slow down the Lizards attack this week?

Brendan McDaniels is a color analyst for the MLL Television broadcasts and will be on Lax Sports Network Thursday, June 2 at 7:30 p.m. as the Rattlers host the Machine. Follow Brendan on Twitter @McDanielsSports.