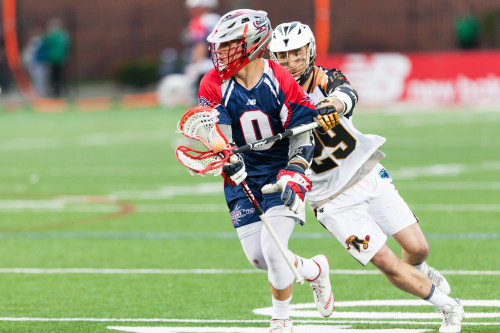 Ohio Machine. Getting MLL all-time leading goal scorer, John Grant, Jr., proves they are in it to win it this year. Adding Junior creates many problems for opposing defenses. He generally draws the top pole, which may not be the smartest move as teams will have to decide if they want to risk putting their No. 2 on Marcus Holman or Grant. Either way, whoever gets that No. 2 will have a huge match-up advantage. This will also allow Mark Cockerton to come out of the box regularly which would keep the best midfield line in the MLL fresh for the fourth quarter. Scott Rodgers and the defense have been solid all season and with even more offensive fire power, it is going to be hard to break the Machine. Outlook: Favorite to win.

Rochester Rattlers. Tim Soudan’s group could not have started the season worse, but they are rolling so smooth right now. John Galloway has been the best goalie in the league over the last month. Galloway’s defense is also playing at an elite level with Mike Manley, John Lade, Joel White, and John LoCascio. More importantly, first year surprise Drew Simoneau has been above 50 percent at the faceoff X which has been a weakness over the last few seasons. Offensively, Ty Thompson has added another solid scorer to an already excellent group. Jordan Wolf has developed a solid two-man game with Ned Crotty and Jordan MacIntosh. Outlook: Outlook: third title game in a row.

New York Lizards. The trade for Drew Westervelt was a mild surprise, but important. Westervelt is a veteran and a proven scorer from the wing. They have a smart, talented offense that will give any defense headaches as more dodging lanes should open with defenses having to respect the shot of Westervelt. BUT, the Lizards defense has been their crutch all year. Not getting defensive help at the trade deadline may end up being the reason they don’t repeat. They are giving up 16.25 goals per game which is second worst in the league behind Denver. The broken foot of Greg “The Beast” Gurenlian does not help the defense as they will now face more possessions. Outlook: Possible playoff team.

Chesapeake Bayhawks. Their roster says they should be title contenders, but their play has not. The Bayhawks have underachieved so far this season, but they have way too much talent to be ignored. They picked up Jimmy Bitter from the Machine last week who may give their offense a jolt if he can get healthy. They also have not been great at times at the X with veteran Anthony Kelly. They picked up Mike Poppleton from Rochester as he was unable to win the job there. They have all the pieces for a contender, they just need to play like one. Outlook: Possible playoff team.

Charlotte Hounds. The Hounds have a favorable schedule the rest of the way so they can very easily sneak into a playoff spot. Mike Chanenchuk and Ryan Brown have allowed the offense to be a lot more creative. They added veteran Kyle Sweeney which will bring some more consistency to the defense. Sweeney is also a huge upgrade for their transition game. Outlook: May be last team out.

Boston Cannons. Will Manny has not been himself lately. The rest of the attack and offensive middie group has been average. Tyler Fiorito has played well, but defense is not strong enough to shut down elite teams. With Rochester, Ohio, New York, and Florida left on the schedule, 2-2 may be the best they can do and 7-7 overall just won’t be enough. Outlook: Watching from home.

Denver Outlaws. Adding Adam Fullerton will make life a little better, but not enough to contend. Outlook: Watching from home.

Florida Launch. They could have improved the defense at the trade deadline, but chose to remain silent. Offense has a ton of talent, but not much direction. Outlook: Watching from home.

Challen Rogers, Boston. The pride of Stony Brook has continued to impress as he tallied three goals and an assist to snap a two-game losing skid.

John Grant, Jr., Denver. In what came to be his final game as an Outlaw, Junior had two goals in the pivotal second quarter as Denver built a four goal halftime lead against the defending champions. Grant finished with three goals and an assist.

Ryan Brown, Charlotte. The rookie had a huge night scoring six goals, a two-pointer, and an assist for eight points in their win vs. Atlanta.

Ty Thompson, Rochester. Thompson did an outstanding job in place of Ned Crotty scoring five goals and adding an assist.

1- Rochester (5-3) Hottest team in the league, last loss was to this week’s opponent, Boston.

4- Charlotte (5-3) Adding Kyle Sweeney to the defense should help.

Brendan McDaniels is a color analyst for the MLL Television broadcasts and will be on Lax Sports NetworkSaturday, July 2 at 5 p.m. as the Rattlers host the Cannons. Follow Brendan on Twitter @McDanielsSports.