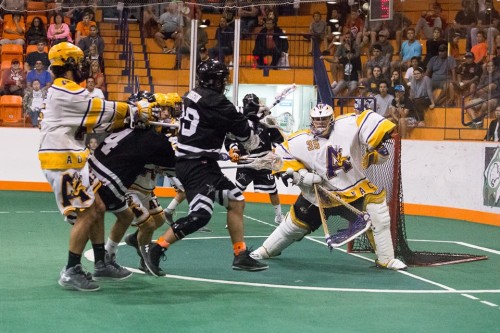 If you wanted to see just how dominant the Coquitlam Adanacs can be at this Minto Cup, a shellacking of Alberta champion Calgary Mountaineers should give you a good idea.

Calgary failed to score in the final 23:52 of regulation and managed to put just three goals past Coquitlam’s Christian Del Bianco overall as the A’s pushed their perfect record to 2-0 with a 10-3 win. Depending on the outcome of the 8:00 p.m. matchup between Orangeville and Delta, Coquitlam has very likely wrapped up the top spot and a clear path to the best-of-five final series.

A slow start to the first period gave way to the opening four goals being scored in a two minute time span. Calgary actually took a lead when Calgary’s game MVP Austin Jerhoff scored just over four minutes into the second period, but it was all Coquitlam after that.

The Adanacs would score eight unanswered, taking a 6-3 lead into the final frame. A beautiful goal off the third period draw by Tyler Pace would make it 7-3 before a Dereck Downs marker just over a minute later all but put the game out of reach for the Alberta champs.

Calgary used quick ball movement and a lot of motion and cutting to get some quality opportunities in Coquitlam’s pressure D, overloading the creases and forcing Del Bianco to make some fine saves in tight. As the third period rolled around, Coquitlam’s defence allowed the Mountaineers very few chances, running the 30 second clock out four or five times in that period alone.

Coquitlam also found success on the offensive end with multiple cutters getting open and some great passing movement leading to a couple of great goals from Downs and Jean-Luc Chetner. Pace has definitely been one of the best players in the tournament thus far and rightfully won MVP honours in the win.

If Delta loses a second game tonight against Orangeville, it renders the rematch of the BCJALL finals essentially useless. All eyes will be on the Calgary-Orangeville game at 5:00 p.m. PST as it’s likely that will be the semifinal game on Tuesday night.