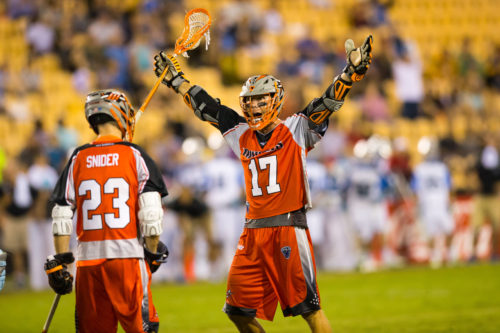 Going into 2016, not many eyes were on the Denver Outlaws. They had lost goalie Jesse Schwartzman, defender Lee Zink, and even traded one of their best pieces in John Grant Jr. at the deadline, and looked to be a team rebuilding.

A 2-6 start confirmed what should have been a bridge year for a Denver team that had missed the postseason for the first time in franchise history. The Outlaws traded Grant at the trade deadline, a move that could have been seen as a white flag for the postseason.

Instead, it paved the way for players like Matt Kavanagh and Wes Berg to carve out a role on offense. The two combined for six goals and two assists in the championship contest on Saturday night, topping the Ohio Machine.

Eric Law, no stranger to the dramatic, tallied the game winner with 12.9 seconds remaining on the clock on a sharp pass from Jeremy Sieverts to give Denver the 19-18 win. Law scored four goals and added three assists to be named the game’s MVP. The Outlaws, amidst delays that lasted an hour and a half, trailed 14-7 at one point and came back to lead for the first time in the fourth quarter.

The Outlaws franchise has made six championship appearances in their 11 seasons as a franchise, winning their only other title in 2014. Since that 2014 title run, the Outlaws had lost their rock in the cage in Schwartzman, and had a tumultuous start between the pipes with Johnny Rodriguez and Ryan LaPlante splitting the duties.

Midway through the season, the arrival of rookie goaltender Jack Kelly out of Brown changed everything. Kelly stepped in as a first year starter, a rarity for pro lacrosse goalies, to lead Denver to a 6-1 record when he played as he won the league’s rookie of the year.

Drew Snider and Matt Bocklet also remained from the 2014 Steinfeld cup, and the two of them created their own niche as leaders for an Outlaws club that had reshaped in the past two years. Coach BJ O’Hara, who coached the Outlaws to their title in 2014, keyed the turnaround in the 2016 title contest when he challenged a goal from Ohio’s Brandon Mangan that was overturned. That successful challenge spared a seven goal run that eventually tied the game 14-14 for the Outlaws before they were able to duke it out in a back-t0-back final frame with the Machine.

The Outlaws were one of seven teams to wrap up the regular season with an 8-6 record, and thanks to tiebreakers, ended up as the third seed and had to face the New York Lizards. Denver stunned New York, the defending champions, defeating the Lizards for their seventh straight victory.

The game itself was the highest scoring championship bout in the 16-year history of the league, and it was fitting for one of the most unpredictable and tight seasons MLL has seen. While it appeared a dynasty was being built in New York, and teams like Rochester and Ohio were developing into potential powerhouses and contenders every year, a team that looked to be heading into its second straight year of futility returned home the victors.