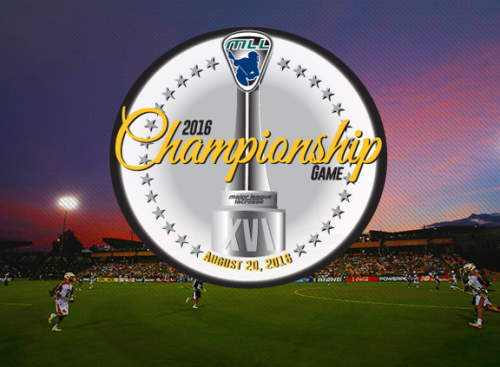 “We’ve had an amazing relationship in Atlanta with the fans, the Atlanta Sports Council and the folks at Fifth Third Bank Stadium,” said MLL Commissioner David Gross. “We’re honored to work with the Blaze organization to bring the 2016 Championship Game back to the greater Atlanta area. The fans have made this an incredibly special event and we’re looking forward to capping off the 2016 season with another great experience for all involved.”

For the past two years, the Fifth Third Bank Stadium has hosted the final showdown of the MLL season for a crowd of over 8,000 energetic fans. The successes of the MLL Championships and the passion of the fan base have brought the newest MLL expansion team to Georgia with the development of the Atlanta Blaze.

“The Atlanta Blaze is extremely excited to be hosting the MLL Championship in our inaugural season,” said Atlanta Blaze Vice President, Liam Banks. “Our Blaze fans are great lacrosse fans who appreciate lacrosse played at the highest level. We are thrilled to be hosting the 2016 Championship at Fifth Third Bank Stadium and know it’s going to be an incredible day for fans in Atlanta.”

The 2016 MLL Championship Game will be a culmination of efforts from MLL, the Atlanta Sports Council and the local business community.

The Atlanta Sports Council, a division of the Metro Atlanta Chamber, has a decorated history of attracting and supporting major sporting events to the Atlanta region, such as two Super Bowls, two NCAA Women’s Final Fours and five NCAA Men’s Final Fours. “The success of the previous two MLL Championships at Fifth Third Bank Stadium speaks directly to the region’s growth and excitement around the sport,” said Executive Director of the Atlanta Sports Council, Dan Corso. “We look forward to working once again with our partners in Cobb County and MLL to host a memorable season finale for the players and fans for a third consecutive year.”

Major League Lacrosse and LB3 Lacrosse, in coordination with Kennesaw State University and the Atlanta Sports Council, brought the first MLL game to Georgia in 2013. The Fifth Third Bank Stadium is designed to provide fans the opportunity to get close to the fast-paced action on the field.

For the first time in League history, the Semi-Final Games will be held at two neutral locations. The National Sports Center Stadium in Blaine, Minnesota and Rafferty Stadium at Fairfield University in Fairfield, Connecticut will each host a Semi-Final Game on Saturday, August 13.

For more information on the 2016 MLL Championship, updates on purchasing tickets, and information on all MLL-related events, please visit www.majorleaguelacrosse.com.