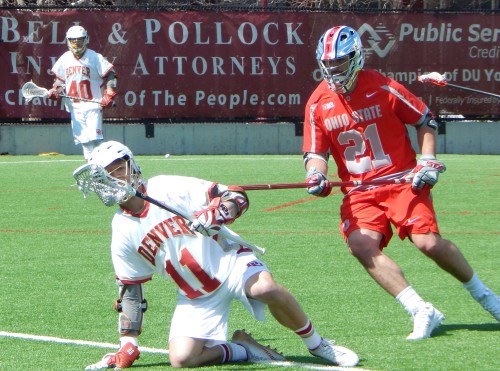 Up until a fourth quarter offensive run by the Pioneers, the match up with Ohio State was a defensive battle the entire way. Jake Withers of Ohio State gave Trevor Baptiste a hard time at the faceoff for the first bit of the game, pulling out scrappy F/O wins that led to the Buckeyes leading the game 2-1 at the end of the first quarter.

In a very back and forth game, both teams had great offensive possessions. The Pio’s fixed many of their early season control issues and were able to get three or four shots off per possession. They rotated the Ohio State defense and caused mismatches that were favorable to their offense. Unfortunately, all those shots weren’t enough to capitalize on every possession.

However, the same goes for Ohio State. They controlled the ball despite pressure from the DU defense and found holes to get shots off. The biggest difference was while Denver tried to rotate the defense and find natural openings, Ohio State used individual efforts from dodges and good ball handling to pull doubles and triples, leaving two or three guys open at a time. They forced the open man, versus Denver rotating open space.

The score remained close and low, evidence of the defensive battle, at 9-6 in DU’s favor with 13:06 left to play in the game. Then, DU did their Denver thing: they pulled ahead and set sail to victory.

Ohio State’s scoring would remain at six while five different Pios went on to score and bring the final tally to 15-6.

The performance was by far one of the best by the Denver 2016 squad this season. Slides and communication were on point defensively, and the ability to rotate open space was optimal. Ball control was much better, and in transition they held their ground.

In an effort to continue building and perfecting the team, three concerns came to light:

1) Alex Ready had a great performance. He had some phenomenal saves from both the perimeter and in close for attempted dumps. His placement was great in the crease. However, half of the Buckeyes goals came from the weak points we’ve seen so far this season: top shelf shots. Two different shots yesterday went right off his head/face into the goal.

2) Trevor Baptiste at the faceoff. Many call the sophomore FOGO specialist a phenom and on track to break college records.

Baptiste continues to work efficiently considering DU wins so many faceoffs and is obviously enjoyed by his teammates. One must wonder when an opponent will have other tricks up their sleeves to counteract Baptiste’s.

3) The over and back rule that the NCAA has put in place. On both sides of the game, the ball came rolling and bouncing back over the midfield line from the box. For those who do not know the rule, just like basketball, there’s no over and back. If the ball flies back off the pipe from a shot, it’s legal for anyone to snag. If it’s a dropped ball from passes, etc. in the box and goes back over, the team that had offensive possession CANNOT possess the ball on their defensive side without the opponent possessing first.

A few times for each team, Buckeyes and Pios alike were diving on turf to save the ball from going back over. Defenders would “hockey drill” the ball back over and without taking possession pop it back.

Every single time, the referees called the over-and-back rule and gave the other team possession. No matter the rules, the defensive players cannot do anything to prevent getting called for possession, even on clean taps. Additionally, players are going to start getting hurt from unnecessary slides and dives to save a possession.

A rule intended to increase game pace, but in realty is questionable for player safety and knowledge of the game rules.

This is the part of the season we begin to wonder: is a repeat championship expected?

Denver plays Penn State next on March 26 in Dallas, Texas. It will be a nice a few days’ rest and back to practice. They are now on a 20-game win streak; 19-win streak at home. Their next home game is April 16 against St. John’s. The Pioneers have three away games before appearing back in Denver.