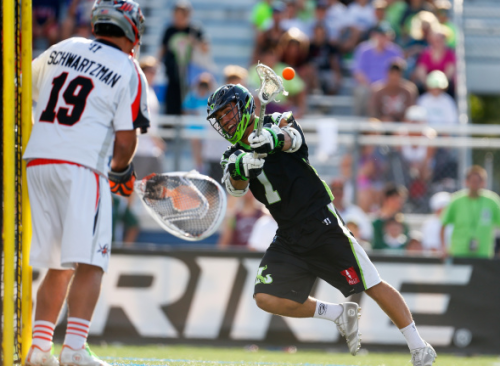 Two wild overtime games and a postponement have caused quite the shake up in the rankings heading into Week 10. We have a new team atop the rankings with the Machine’s loss and the Rattlers rose up the rankings thanks to their dominant victory over the Outlaws. How far did they rise? Take a look for yourself below:

1- New York (6-1)- The Lizards continue to pull out wins by the skin of their teeth after beating the Cannons in overtime thanks to a Dave Lawson goal. They find themselves in the top spot this week but only because Ohio had a somewhat shocking upset and because the Lizards continue to find ways to win. That defense is still iffy and is something to look at heading into their game against a very capable Outlaws offense. Expect another close one for the Lizards.

2- Ohio (6-3)- The Machine drop this week in the rankings as a result of a somewhat shocking loss to the Blaze. Kevin Rice tore up a defense that was tops in the league in goals allowed a game. The Machine goes against another great attackman in the Rattlers’ Jordan Wolf this weekend. If they can’t contain him, then they could be eying another potential upset.

3- Rochester (4-3)- The Rattlers make the biggest jump this week in the rankings as they handled the lowly Outlaws. The defense handled the task of a tough Outlaw offense and the Rochester offense scored a season high 19 goals. However, two of Rochester’s wins have come against Chesapeake so this week’s game against the mighty Machine will be a true litmus test as to whether or not the Rattlers are true championship contenders.

4- Chesapeake (4-3)- The Bayhawks have an opportunity to get a leg up in the playoff race after a week off in Week 9 as they take on the Cannons this week. They move up a spot because of their head to head win over Charlotte in Week 7. However, they were jumped by Rochester primarily because Rochester has beaten them twice this season and has a much stingier defense. It will be interesting to see how Myles Jones continues to find his way in an offense that is very well balanced.

5- Charlotte (4-3)- Charlotte’s Week 9 contest against the Launch was postponed and negating the ability to head into Week 10 at 5-3. Unfortunately, they fall in the rankings because of the postponement. While their defense is pretty solid, their offense has scored the second fewest goals in the MLL. They have a nice three headed monster in Joey Sankey, Mike Chanenchuk and John Haus but the offense is a question mark after that. The Blaze will be a tough test for them in Week 10.

6- Boston (4-5)- The Cannons continue to be an up and down team as they now have their second two-game losing streak of the season after their overtime loss to the Lizards. They fall a spot in the rankings as a result and will look to get back to .500 as they take on a Chesapeake team that is coming off a week of rest. It will also be an interesting clash of contrasting styles as Chesapeake is more of a grind-it-out team while Boston wants to get up and down the field.

7- Atlanta (3-4)- The trade for Matt Mackrides paid immediate dividends as he scored the game winning goal in the Blaze’s upset victory over the Machine. Kevin Rice continues to tear it up this season and now leads the league in points after his eight point performance. This week the Blaze can even their record as they take on the Hounds, who will be well rested after their game was postponed last week.

8- Denver (2-6)- The Outlaws continue to struggle as they fell to the Rattlers 19-11. It ruined the retirement of Jesse Schartzman’s number and boy do they wish he was back on the team. Their defense is a mess and it won’t get any easier as they face a high powered Lizards offense. The good news is that the Lizards defense isn’t anything special and the Lizards have had several close calls this season.

9- Florida (1-6)- The Launch stay at the bottom of the rankings despite having their game with the Hounds postponed last week. They will continue to be there next week as they don’t play once again in Week 10. Hopefully, the two weeks off will allow them to work out the kinks for an offense that has scored a league low 84 goals on the season.