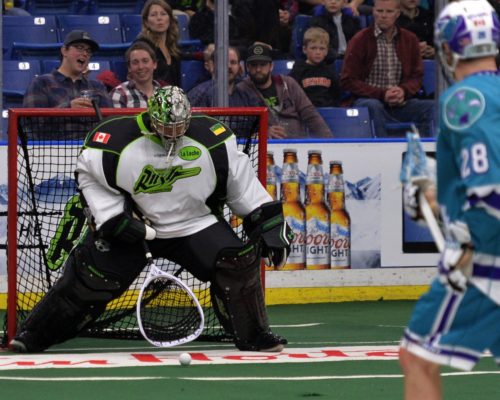 North Shore’s improbable playoff push was given another boost on the weekend, after the Indians came up with two big wins over the Langley Warriors and Coquitlam Adanacs. On the tails of signing former NLL Goalie of the Year Aaron Bold to backstop them to potential provincial glory, Shore is now 4-7 and just a game back of Victoria and Coquitlam in the WCSLA standings.

They squeaked out a 10-9 win over Langley at home on Friday after outpacing the Warriors 5-3 in the middle frame. Tom Johnston and Steve Hinek led North Shore with five points apiece and Bold made the difference in net, stopping 50 of 59 shots for his first win this season. The Langley defence were valiant in their efforts to stall the Indians’ high-powered offense and only allowed 41 shots on Ryley Brown in total. It will be interesting to see these two teams meet again – potentially in the league finals.

Athan Iannucci and Kelly Susheski led the charges in their five-goal win over the A’s at the Palace on Poirier on Sunday. Nucc had four points and Susheski scored a hat-trick while Bold stopped 30 of 38.

North Shore has three games left on the schedule and after picking up two points from Coquitlam on the weekend are nipping on the heels of a playoff spot. They play Valley twice and Royal City to end the year. That might just be what Shore needs to get into the playoffs.

With Nanaimo having a game up on everyone else but Langley and Lander in the playoff race, it seems like Royal City, Victoria and Coquitlam are in a tight race to stay above Shore. This Sunday will be a game to watch with Coquitlam coming into Royal City to take on the Capitals. That could be a third-straight loss for the Adanacs and would surely put a damper on their post-season hopes.

Nanaimo isn’t with faults either. They were down 6-4 to Valley in a surprisingly competitive game last week until they found a little momentum on offense and put the game away late in the third. They almost took a huge win from Langley the night after but going .500 on the mainland is a decent weekend. As long as Shires and Andrew Miller are finding the night, Nanaimo is going to be competitive with the likes of Langley and Ladner. The T-Men are also getting Mitch Parker, who played last season with the Senior A Nanaimo club.

Ladner bounced back with a close 11-9 victory over Royal City – uplifting considering they lost a pair at home to Island teams the weekend before. The Pios used a six goal first period to outpace the Capitals; Mike Berekoff and Quinn Waddington led Ladner scorers with four goals apiece. They get a chance to right the ship at home on Thursday when they host the Adanacs.

The newly-signed Bold made the biggest impact of the week – both on the floor and off. His signing with North Shore indicates a desire to contend on more than just a provincial level, the Indians opening up the pocket books to bring in the likes of Belton, Garrison and Bold. To get a goalie of this calibre is a huge acquisition and would be worth the money if it meant turning around an 0-7 start and winning a WCSLA Championship.

Bold made 80 of 97 overall saves in his two debut starts for Shore and was pretty instrumental in both games. Shore still has weaknesses, particularly on the backend, and he will be crucial in shutting the door to some of the league’s other higher-scoring teams. So far, he’s doing a pretty damn fine job of that.