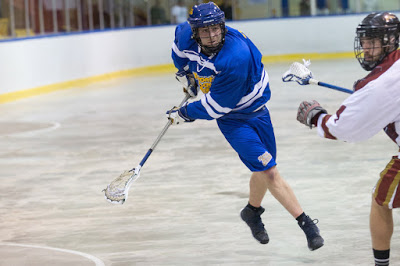 After a very disappointing season, the Kitchener-Waterloo Kodiaks(now based in Cobourg) had an opportunity to select players in the draft that are able to make an immediate impact and it looks like general manager Steve Dietrich did exactly that.   With the first pick overall, the Kodiaks selected 2015 OLA Jr.A breakout player John St. John. The Toronto Beaches product netted an impressive 92 points in 2015, which helped him get drafted 26th overall to the Rochester Knightawks in this year’s draft. St.John been playing with senior aged players since 2013 which will help with the transition to the MSL.   With their next two picks, the Kodiaks nabbed a deadly duo from the 2015 Founder’s Cup Champion Akwesasne Indians in Adam Bomberry and Seth Oakes. Bomberry had a huge summer for his trophy case as he also aided the Six Nations Arrows to a Minto Cup title. The 6-foot-1 defender has looked solid in his rookie NLL campaign, tallying two assists and 14 looseballs in two games with the Rochester Knighthawks.   Oakes has terrorized the Ontario Jr. B Lacrosse League for the last two seasons, netting 170 points in 28 games for the Indians. Last season alone, Oakes tallied 72 points in just 11 games, missing nearly half the season while at UAlbany.
The one issue with the two players is the travel but with the two being drafted to the same team and the club moving to Cobourg, it may increase the chance for the players to report.
The Kodiaks continued the Jr. B theme, taking OJBLL standout Fred Hartley with the 11th pick overall. The crafty lefthanded shooter from the Gloucester Griffins found the back of the net 172 times in 92 career Jr.B games, including 61 in 2014. The Ottawa,ON native also tallied 12 points in five games with the Peterborough Lakers. This is another pick that makes more sense after the announcement of the relocation to Cobourg.   The Kodiaks rounded out the draft with a pair of tough defenders who have no problem dropping the mitts by taking Six Nations Arrows’ Keegan Letourneau(18th overall) and the Peterborough Lakers’ Tyler Roche(19th overall).   Before the club announced the move from Kitchener-Waterloo to Cobourg, Dietrich still managed to put together a strong draft class, but after we learned that the Kodiaks were headed eastbound, the draft looks even better.   Dietrich wasn’t done there. Cobourg shipped Joel Matthews to Peterborough for Pete Rennie, Matt Crough and Dylan Goddard.
With a promising young roster and strong draft class, the Kodiaks future seems much brighter in their new home of Cobourg.