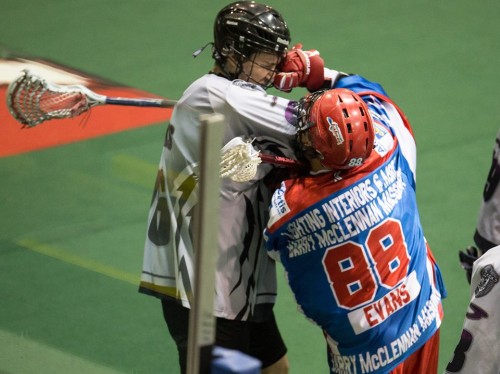 In his past three games, Turner Evans has been producing at a potent clip, picking up 12 points in three straight Lakers victories. Evans kicked off his week with a three goal performance against the powerhouse Six Nations Chiefs. Evans’ third period goal to complete his hat-trick came at a crucial time, as the Chiefs had gone on a five goal run, pulling within one goal of the Lakers, who entering the third held a 10-4 lead. Following his three goal game, Evans would go on to pick up a goal and two assists for three points in a low scoring 7-5 win over the Oakville Rock. Closing out his already impressive week, Evans picked up six assists in an 11-5 route of the Brooklin Redmen, to give him four goals and eight assists on the week.
2. Tyler Ferreira – Brampton Excelsiors
Tyler Ferreira had been relatively quiet through the Excelsiors’ first seven games this season, totalling 14 points in those seven games, for a respectable two points per game average. However in his past three games Ferreira has exploded offensively, giving the offensively challenged Excelsiors the bonafide secondary scorer they lacked following Joe Resetarits, Mike Burke and Mike Melnychenko. Ferreira kicked off his week with a modest goal and two assists in a loss to the Oakville Rock, however it’s important to note Ferreira was in on all goals as the Excelsiors offense only mustered three goals in the 5-3 loss. On Sunday evening Brampton traveled to Kitchener-Waterloo for a game with the Kodiaks, with playoff implications on the line. In the game Ferreira rose to the occasion, picking up a MSL career high five points on an impressive two goals and three assists. Finally to round out an already sound week of production, Ferreira added a goal and four assists in a high scoring 22-14 loss to Six Nations. With his 13 points this week, Ferreira nearly doubled his season output, and has since become the Excelsiors leading scorer with 27 points in 10 games.
3. Derek Searle – Kitchener-Waterloo Kodiaks
The 6-foot-3, 215 pound defender continues to excel in his rookie season with the K-W Kodiaks, after being arguably the best defender in the OLA’s Junior “A” loop last season. Searle has provided tenacious on ball defense, excellent speed in transition, and has even been producing offensively. This past week, on top playing excellent defense and scooping a ton of loose balls, Derek Searle also added a total of five points on a goal and four assists. Searle picked up a single assist in the Kodiaks 9-6 loss to Brampton last Sunday, and followed that up with a goal in the Kodiaks loss to Six Nations on Tuesday. However on Wednesday night in Brooklin, Searle picked up three assists in his Kodiaks come from behind victory over the Redmen, in a game that had huge implications on the MSL playoff picture. Not NLL draft eligible until the 2017 draft, Searle will be a name to watch over the next few seasons.
4. Dan Lomas – Oakville Rock
One of the lone rookies to consistently find himself in the Rock’s veteran laden lineup, Lomas continues to produce in a depth role behind elite offensive weapons such as Stephan LeBlanc, Jeremy Noble, Wesley Berg and Rob Hellyer. Lomas currently sits third in Rock team scoring, appearing in all 12 of the Rock’s games to date. This past week Lomas was somewhat quiet by his standards, however the Rock did only pick up a total of 10 goals in their two game week. In the Rock’s 5-3 win over Brampton, Lomas picked up a goal and two assists, leading the Rock in scoring on the evening. Meanwhile in Oakville’s narrow 7-5 loss to Peterborough Lomas was able to find the score sheet on one occasion, picking up a single goal.
5. Kyle Whitlow – Brooklin Redmen
On a Redmen squad that has struggled to produce offensively outside of Shawn Williams and Mike Teeter, Kyle Whitlow has been one of very few bright spots on a young Redmen squad this season. While consistency issues have plagued Whitlow throughout his rookie season, he does sit third in Redmen team scoring with 29 points in 13 games. Whitlow and fellow youngster Dan Lintner have been effective on the Redmen right side this season, excelling on the man advantage. This week Whitlow appeared in two games, unfortunately both were losses for the Redmen keeping them in the basement of the MSL standings. After being held pointless in a 11-7 loss to the K-W Kodiaks on Wednesday night, Whitlow responded on Thursday night in Peterborough picking up a goal and three assists to lead the Redmen in scoring with four points.
Honorable Mention
Dave DiRuscio (G) – Kitchener-Waterloo Kodiaks
Johnny Powless (O) – Six Nations Chiefs
T.J. Sanders (O) – Brooklin Redmen
Josh Currier (O) – Peterborough Lakers
Jordan Robertson (O) – Kitchener-Waterloo Kodiaks