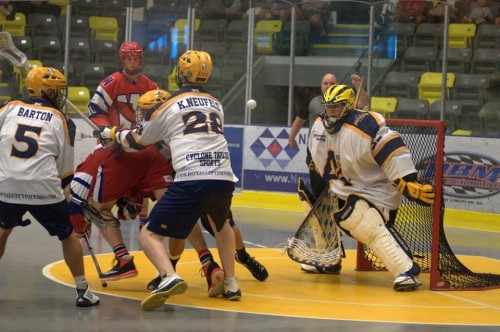 Statistics in lacrosse have often gone undervalued, without much attention paid to anything more than goals, assists and saves. Although statistics can appear complicated to those who have never focused in on them, they’re just numbers in the end. But those numbers have underlying benefits as they can help give an explanation or a narrative to a question as simple as “what happened?”

Consider that the difference between Coquitlam and Langley making the playoffs might be the Adanacs lack of goal scoring with the man up. However, we shouldn’t accept that as fact, as it’s misleading. Which is why stats mesh well with watching the game and using it as a tool to learn more, given that lacrosse is usually high tempo and physical. It’s a tough game to keep up with over a 60 minute period – perhaps the reason why statistics aren’t as highly regarded in the first place.

Despite the games being played on the floor, the numbers give us a different perspective. Here are some statistics from this WLA season.

4.08 – The point per game average of Maple Ridge’s rookie sensation Dan Taylor, tops in the league for guys who have played over 10 games. As I mentioned in the WLA Rookie Report, the additions of Taylor and Goodwin on the left side have revamped the Burrards offence.

140 – The Burrards currently sit second in goals behind Victoria despite playing one less game than most of the league. Taylor and Goodwin are one-two in points, contributing 37 goals and 67 assists.

25 – The percentage of Maple Ridge’s offence created by Taylor and Goodwin. That’s the highest rookie tandem point share percentage in the league.

555 – But that doesn’t tell the whole story; McDonald has faced more than 100 shots more than any other goaltender. His save percentage is a modest 78.6 per cent.

766 – McDonald’s minutes played, another indication of the reliance the Thunder coaching staff has in their netminder. That is again by far the most in the league, but Tye Belanger is second and he was a late addition for Burnaby.

140 – Langley’s backup goaltender Rocky Bowman has shown well in limited time, winning two games with a solid 18 goals allowed on 109 shots. Getting McDonald some rest could be beneficial for Bowman as well, where he can get some experience in critical games.

61 – An impressive goal differential for the Victoria Shamrocks who had four of the top five scorers in the league at several points along the way.

237 – Small, Duch, Conway and King’s overall point totals, an amazing feat. Daryl Veltman is having a nice year as well, with 44 points. One of the greatest things to watch in lacrosse is a good offence, and Victoria still haven’t really gotten Dan Dawson back into the mix. THe Shamrocks have a very legitimate chance to win a Mann Cup if this offence is able to get in sync at the right times.

1:06 – The length of the season’s best fight between New Westminster’s Brodie Birkhoff and Maple Ridge’s Daniel Amesbury. Both were suspended for leaving the penalty box and the bench to square off, but it was a long tilt with bombs traded both ways. Hard not to think Amesbury and Birkhoff will go again some time down the line.

161 – Langley’s Patrick Saunders shot total, the highest in the league. 16.1 is also his shooting percentage, which is good for 26 goals on the season, a goal behind Duch and King.

12 – After upsetting Victoria in back-to-back games to open the season, Nanaimo had lost 12 straight games and all but dropped out of the playoff race weeks ago. But they finally picked up a win against a second WLA team, playing spoiler and picking up a big 9-8 W.

0-5 – Despite having not won a game in this WLA regular season, the Timbermen should get a good look at Peter Dubenski down the stretch. Dubenski is a Nanaimo product and was apart of the haul Nanaimo got in the WLA Draft. They may know him well, but they need to know if he can be the goalie of the future at the WLA level. His numbers are pretty much on par with Zak Boychuk, but Dubenski has kept Nanaimo in a couple of games they had no business being in.

10 – The difference in points between Nanaimo’s leading scorer, Cody Bremner and their fifth leading scorer, Eli McLaughlin. The balance Nanaimo has on offence is solid, and with the youth they have it’s a good opportunity to get lots of reps offensively towards the end of the year. They should expect this group to remain together, and even add more talent to the mix through the draft.

49.3 – Part of Victoria’s dominance is the effect of their special teams, specifically their power play. With 33 goals on 67 opportunities, Victoria is absolutely deadly with the man up; no other power play in the league has a scoring rate above 40 per cent.

85.8 – While we’re on the topic of elite special teams units, the Salmonbellies have been absolutely ridiculous with a man down. They kill penalties far better than any in the league, despite having the most penalties taken with 113. They’ve only allowed 16 goals all season.

14 – Goals scored shorthanded by Victoria, tops in the league. Only three other teams have more than five scored: Maple Ridge (9), New Westminster (8) and Coquitlam (8).

33-7 – He only suited up in two games for the Thunder, but it’d be interesting to see what Ryan McMichael could do in the faceoff dot playing an entire 18 game stretch. He was 33-7 in those two games and has long been regarded as one of the best faceoff guys in lacrosse.

344 – Total faceoffs taken by Maple Ridge’s Zack Porter, which is a ton of faceoffs when you break it down. Porter has played in 16 games, which comes out to about 22 faceoffs a game.

55.2 – The faceoff winning percentage of New West’s Sean Robinson, who has won 85 of 154 faceoffs. Faceoffs are both a dying art and an underrated commodity as it contributes heavily to who possesses the ball more.

8 – Goals scored on special teams by Victoria’s Jesse King. Being able to get it done in all facets of the game has contributed to King’s share of the WLA goal scoring lead.

4 – Corey Small might be having his best professional season of his career. He’s scored four game winning goals already this season, leads the WLA in points and isn’t far behind in points per game. Stealth fans should be getting excited at the prospects of a full season of Logan Schuss and Small on the left hand side.

98 – Let’s take a look to the future, where Cole Shafer might be raising his profile enough to get in the No. 1 pick conversation for next year’s WLA Draft. The diminutive sniper scored 98 points in 17 games and lead the BCJALL in points. Shafer also had 45 goals and fell an assist shy of winning the triple crown.