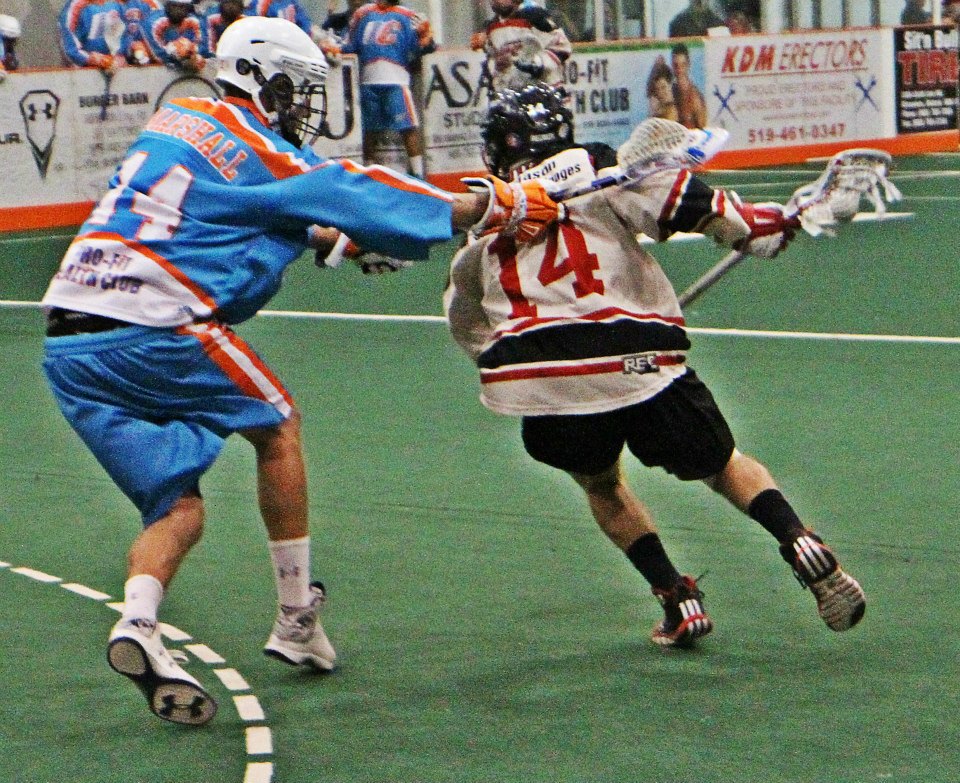 On Wednesday evening the Brooklin Redmen welcomed the first place Six Nations Chiefs to their home floor in Whitby, Ontario faced with a nearly insurmountable task, as the Redmen would need a win against the powerhouse Chiefs to keep their narrow playoff hopes alive. However that insurmountable task was crossed off the list on Wednesday evening, as the Brooklin Redmen where able to keep their 2015 playoff hopes alive with a narrow, hard fought 8-7 victory.

Led by rookie T.J. Sanders and veterans Shawn Williams and Derek Suddons, the Brooklin Redmen rode a strong second period performance to victory. The Redmen came out early in somewhat lackadaisical fashion for a team that had their playoff lives on the line, however luckily for the Redmen the potent Chiefs offense wasn’t able to click early on, as they showed signs of playing an evening prior. None the less Ryan Benesch would open the scoring for the Chiefs at the 1:51 mark of the first period, with Jeff Shattler picking up the lone assist. Redmen rookie T.J. Sanders would pick up his first of two on the evening just over three minutes later to square things away at one. Benesch and Sanders would again trade goals, before Mike Teeter put the Redmen up 3-2, only to see MSL leading scorer Dhane Smith pick his 35th of the season to even things up at three apiece as the first frame wound down.

Period two was dominated by the Redmen, as something must have clicked during the ten minute intermission, as the Redmen came out flying, with Dan Lintner putting the Redmen ahead 4-3 early on in the second frame. While veteran Jeff Shattler would even the score at four’s just 23 second later, the Redmen would go on a four goal run through the final eighteen minutes of the period. Goals from Patrick McCrory, Derek Suddons (2) and Mike Teeter gave the Brooklin a cushy 8-4 lead heading into the final twenty minutes.

Knowing their playoff lives where on the line, the Redmen seemed to play tentatively through the final twenty minutes of action, as they looked to go into a defensive shell of sorts. While the opportunities where there for the Redmen, the Chiefs defense and goaltending also bared down as they looked to go on a run of their own and force overtime. Despite and onslaught of Six Nations pressure that resulted in three straight third period goals for the Chiefs, the Redmen where able to hunker down, bending, but not breaking as they secured the narrow 8-7 victory as Derek Suddons picked off a Chiefs pass in the dying seconds of the game, to salt the game away.

With the Redmen securing back to back victories in must win games against Oakville and Six Nations, they remain alive with one game remaining for them on the 2015 MSL regular season schedule. That game will come next Wednesday when the Redmen host the Brampton Excelsiors, in a game that very well could decide the final playoff position. However the Redmen’s best shot at securing a playoff spot would be hoping the Oakville Rock drop their final two games against Six Nations and Brampton, while the Redmen would still need a victory in the regular season finale against the Excelsiors.