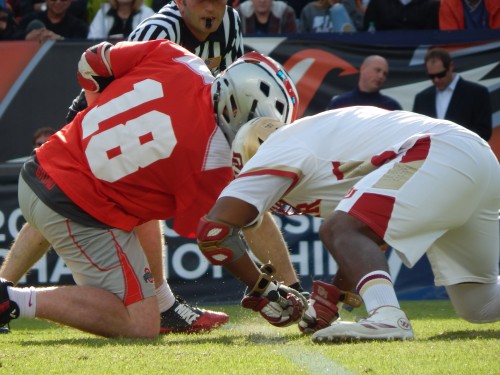 The moment every lacrosse fan has been waiting for has arrived – the NCAA Final Four Weekend in Philadelphia, PA. The road to the big show this season took numerous turns, twists, roundabouts and off-road trails. Surprise upsets, two different top ranking games in one season – it was all there, and culminates its impact this weekend. The two oldest of the four programs are representing the youngest, newest conference. Notre Dame a younger program, represents the ACC, and Denver the BIGEAST.

The moment of truth that every DU fan knows of – we’re back at the hump. We’re at the semifinal game again, a different opponent, and a new venue. I see two different Denver teams heading to semifinals. As a fan, these two opposites scare the heck out of me.

The first and most prominent this season is the winning Pioneers. The team who’s defense can hold opponents scoreless for two or more quarters. The team who can crash crease in formation or go one on one in an open set. The team who finds open shots anywhere.

Then, there’s the OTHER Denver team I see. The one that can’t get over that semifinal hump. The one that was trailing Ohio State 7-1 to start the game. The team who’s player passed the ball to a waiting substitution in the box and Tierney gave him hell on the sidelines for not being focused.

Denver is exciting for the same reasons Ohio State was. They’re exciting for the in-game comebacks, for the solid defense, for quick surprising saves from Ryan LaPlante, and punishing goals from Cannizzaro and Berg.

Notre Dame is a big mountain to get over for Denver. Though DU upset the Irish in a regular season OT thriller, Notre Dame had controlled the majority of that game. Then, in the scrappy quarterfinal game against Albany, the Fighting Irish showed their abilities to stay organized and efficient despite much back-and-forth play.

The biggest thing for the Pio’s will be shutting down the Notre Dame attack unit. That would take away three of five or six big players in the Irish’s success this season. Controlling game clock, staying tight on defense, and shutting down dodges from attack. DU defense seems to take a quarter or so to get their game together. They need to come out fired up and ready to stick their man hard.

On the season, Matt Kavanagh (51pts), Conor Doyle (50pts), Mikey Wynne (36pts) and Sergio Perkovic (36pts) lead the team with their appetites for destruction. Matt Kavanagh hasn’t been himself this postseason. He had a fantastic regular season as a junior, and come the playoffs has gone quiet. The question is, is it a slump or is he going stealth mode to show up this weekend.

However, Conor Doyle and Sergio Perkovic were the stars of the quarterfinal game against Albany.

Perkovic had 4 goals and one assist, while Doyle had 3 goals and 1 assist. Doyle will surprise defenses by finding open real-estate and slipping into it sneakily. Perkovic is a monster up top at midfield and if he doesn’t find a rotation to dodge on the smallest defender, he can assuredly power against a bigger opponent and find dump passes or shoot through them.

Denver’s Pat Karole on defense would be a good matchup to take Kavanagh, but I think he’s needed more protecting up top against Sergio Perkovic. A better body size matchup.

Mikey Wynne was a bit quieter in the game against Albany, but he had a lot of recognition in the Denver regular season game, despite the Pioneers holding on.

If we’re following the Cinderella story trend that this postseason is taking, then fate is in the Fighting Irish’s favor. Ohio State upset DU earlier in the season and DU got their revenge. Notre Dame held on past Albany and now has their chance at reclaiming destiny.

How can Denver beat Notre Dame’s defense? I mean, they always seem organized, tough and fast. Attacking down low could be the answer, but Notre Dame’s Matt Landis was just named USILA’s Defensive Player of the Year. If Pio midfielders want to cut down for a low ball, the Irish will be good at tracking them.

Wes Berg, Connor Cannizzaro and Zach Miller will need to use their sizes to advantage. Berg has a large, hard body that can push people and obstacles out of his way. Much of this season, I’ve seem him take punishing snipers from outside. This weekend, he should use that to his advantage and take the ball straight into traffic.

Cannizzaro is a tiny guy, but that’s exactly what lacrosse calls for. He can spin and swim his way under bigger defenders to get to crease. He’s done it much of the season, and it will need to continue in tomorrow’s game. Notre Dame will look to shut that down.

Miller can also slink his way through traffic, but I’d like to see some bullets from outside on his part. I think he has an accurate shot that could be more utilized if the ball can find him open around the perimeter. He just has to pull that trigger.

Ryan LaPlante will be on point for Denver, but will Shane Doss of the Fighting Irish. Doss has had some pretty saves this season, but he hasn’t been as consistent as LaPlante.

This is the biggest matchup of the Final Four in my opinion. This game will top any performance of the Championship. Game time is 1pmEST (11amMT) on ESPNU and live at Lincoln Financial Field Saturday May 23