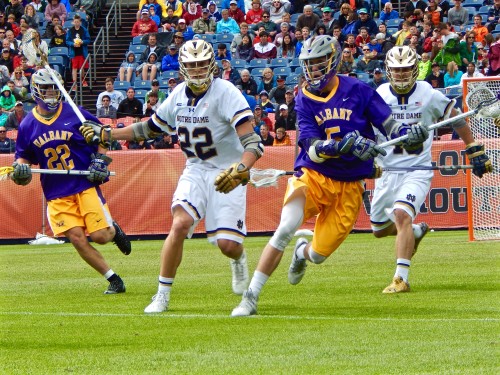 As NBC Triple Crown announcer Larry Collmus says at near the end of every horse race, “down the stretch they come!”  We’re at the home stretch of the NCAA Lacrosse season with Memorial Day Weekend finally here.  Not only do we have Division 1 semifinals and the championship game, but we’ll also have the Division 2 and 3 Championship games as well.  Here’s one player from each participating team to watch for, if you plan on watching all of the games this weekend:

A Matt Kavanagh (Jr.): Conor Doyle has no doubt been the keystone of this Irish offense during the NCAA Tournament.  In the first game against Towson, it was Doyle and Nick Ossello that carried Notre Dame after a slow start at home.  And last week against Albany, Doyle and Sergio Perkovic helped the Irish overcome an Albany rally in the third quarter.  If this pattern continues, Will Corrigan will have a big game, but the bigger story has been the one goal from Kavanagh the entire tourney, which came in the first half of the Albany game.  It’s not the Kavanagh that has been around for two years or the Tewaaraton finalist we’ve seen this year.  It’s time for him to step up the next two games if Notre Dame wants to win its first ever NCAA Championship in lacrosse.

M Trevor Baptiste (Fr.): Out of a team that includes Connor Cannizzaro, Tewaaraton finalist Wesley Berg, and Zach Miller among others, my player to watch is Baptiste.  In the regular season, Baptiste was one of the top faceoff men in the nation.  But in games against Brown and Ohio State, he struggled in parts of those games.  The FOGO, who has also been out as a defensive midfielder lately, dominated Notre Dame in their first meeting, losing only seven draws and caused Notre Dame to five violations in the game (four coming in the first half).  So now Ossello and PJ Finley have played against and seen more film on Baptiste this season.  I think Baptiste needs another dominant game at the “x” in order for the Pioneers to move on.

M Charlie Raffa (Sr.): I think there’s no question that he’s back to normal after his performance last week against North Carolina.  A big help came from his wingers scrapping for groundballs in Annapolis as well.  In the first game against Johns Hopkins, Raffa went 13-of-22 in three quarters with Maryland leading by a goal, before being knocked out in the 4th, where Hopkins won seven-of-eight and also the game.  I think to get ahead early, Raffa has to dominate Hunter Moreland and Drew Kennedy at the “x” and let the offense take control from there.  Extra possessions would mean a lot for the Terps.

G Eric Schneider (Sr.): Outside of Conor Doyle, Eric Schneider has been the most valuable player to his team so far in the tourney and if Hopkins wins the championship, he takes my vote for most outstanding player of the tourney.  Schneider has regained his confidence that he lost earlier in the season, and he got it at just the right time.  He has played his two best games against Virginia and Syracuse, which were both in the tournament.  As I said above with Raffa, sure if Raffa dominates at the “x,” that’s great for the Terps.  But if Schneider stands on his head in the crease, Raffa would then be ineffective and the extra possessions would go to waste.  Schneider took on one of the best offenses last week in Syracuse and handled them well.  I think he can do it again.

G Alex Kwarec (Sr.): The senior transfer from Onondaga Community College leads Division II in goals against average (6.83 GAA).  Division II’s most outstanding goaltender has anchored the Dolphin defense throughout the season.  Kwarec recorded 11 saves on 18 shots on goal in the overtime win against Merrimack win last week.  Limestone has only scored single digits in an 8-7 win over NYIT in early March.  The Le Moyne defense hopes to limit the Saints to single digits again and end their hopes of back-to-back titles.

M Kevin Reisman (Soph.): Kevin Rice is one of the best players in Division 1.  Kevin Reisman (pronounced the same as the former) was named Division II’s most outstanding player as a faceoff specialist.  He leads the nation in multiple faceoff and ground ball categories, with a win percentage of .751 and 10.75 ground balls per game, helping jump start Division II’s top-ranked offense.  I have not seen him in person this year and will see if he is indeed the Trevor Baptiste or the Ben Williams of Division II.

A John Uppgren (Jr.): Once again, the Jumbos offense is explosive.  Unlike last year where they had three players with over 100 points, they only have one.  That player is John Uppgren, who has 122 points on the season (72 G, 50 A) and had 124 points last year.  They’ve scored double digit goals in all of their games but two, in which they lost both.  Uppgren not only will need to put up many goals, but also needs to continue sharing the ball to his teammates.  He is a great team player, and will be a major asset again next season.

A Austin Stewart (Jr.): If I told you there was a player in Division III that had more points than Uppgren, would you believe me?  Because there is, and he does more in the goals department.  With 124 points, Austin Stewart is the big offensive weapon for the Hornets.  The biggest stat is that he has 106 goals.  Let me repeat that again, 106 goals.  He’s gone off for at least three goals in almost, if not all, of his games this year, and also has fellow classmate Aaron Murphy recording points as well.  This D3 title game should be a wild shootout between two wild offenses