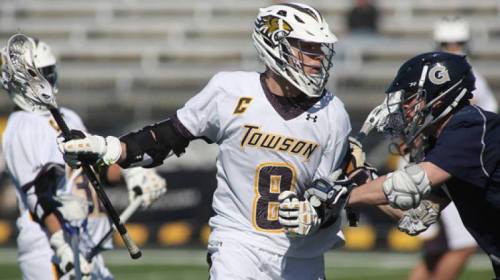 Towson started off their season with a great 7-5 victory to upset Johns Hopkins. Since then, they have posted an 11-5 record on the season and are now in the NCAA tournament looking for a National Championship.
They ended the regular season off with two tough losses to CAA conference rivals Hofstra and Drexel but came back to beat last year conference champs Drexel 11-8. In the conference championship, the Tigers came out and beat UMass in a very exciting 9-8 game to win the CAA title for the second time in three seasons.
The Tigers young attack is lead by sophomore Joe Seider who has 38 points on the season another sophomore is Ryan Drenner who has 34 points and junior Spencer Parks who has 29 points.
All three members of Towson’s starting attack all grew up in Maryland. Andrew Hodgson is a great player from West Islip Long Island and was a big part of winning state championships along with Nicky Galasso. Hodgson is not a very big midfielder but he is very fast. He is a veteran back for his fifth year with the program he has a very good shot (15G, 4A).
On defense JoJo Ostrander is his team’s top defender the senior out of Farmingdale Long Island has been a steady and strong defender since day one on campus. In net Tyler White has been the starter all year making 163 saves the most he has had in one game this season is nineteen vs. Mount Saint Mary’s.
High Point is still a young program out of North Carolina. They became the state’s third Division I lacrosse school behind Duke and UNC a few years back. The Panthers offense is run through its attack ;juniors Matt Thistle who has 49 points while Canadian Dam Lomas has 47.
Mitch Leclair a sophomore out of Maryland, who also has 47 while freshman Connor Robinson out of New Westminster B.C has been a big impact through the midfield scoring 15 goals so far while adding two assists. Like Towson, High Point had a one goal game win for its conference championship over Richmond. Richmond is just in its second year but won the conference last year while making the tournament.  Dan Lomas had a huge five-point game to give his team the win.
It is always good for college lacrosse to get new programs into the tournament. High Point can hang their hat on making it but you know they want to make a run while upsetting some teams. Towson has a strong lacrosse program and should win but you just never know come tournament time.