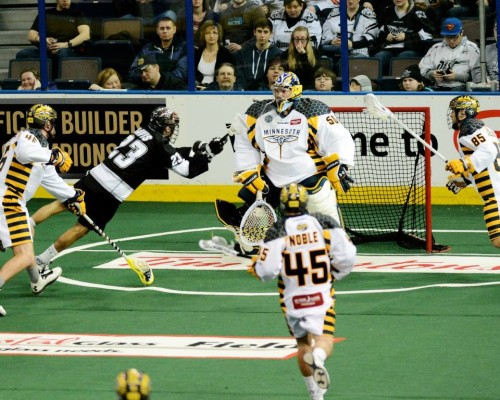 For the 2015 NLL season, the Swarm failed to make the playoffs for the second year in a row, posting a 6-12 record. Only Vancouver and New England had worse records. The team could not piece together more than two consecutive wins. The bulk of February and March was spent on a seven game losing streak. In March, Kiel Matisz was lost to injury for three weeks; Callum Crawford missed the final three weeks of the season with injury.

So, enough doom and gloom for the moment. Let’s focus on the bright shiny star that us Shayne Jackson. Jackson had 78 points this season. He holds the team lead for points, goals (30), and assists (48). He was one of five players who played in every game. Jordan Macintosh continued to tane the majority of the faceoffs, with some help from Corbin Tao and Ethan O’Connor.

The highlight of the season was probably the third game of the season against New England. Minnesota won that on 19-13. In it, we saw an eight point game from Crawford (3g 5a), seven points from Jackson (4g 3a), and six points from Miles Thompson (2g 4a). However, with ever highpoint, there comes a low one. That would be April 4th against the Knighthawks. The Swarm suffered a crushing 2-10 defeat. Crawford and O’Connor had the goals for Minnesota. They had beaten Rochester in their last meeting 7-6.
During the season, the Swarm traded away Cam Flint, captain Andrew Suitor and last years number one draft pick Logan Schuss. Flint did not play a huge role on the team, but Suitor and Schuss were lart if the backbone. In return, the Swarm received Joel White and Johnny Powless. While these are good players, you can’t expect them to walk onto a team the final month of the season and have great successes.

On May 4th, the Sworn released a statement announcing that their remaining coaching staff of Joe Sullivan, Aimé Caines and Rory McDade would not be returning. Bobby Keats was let go during the season. This was McDade’s first year coaching with the Swarm. Sullivan and Caines had been assistant coaches since 2009. Sullivan was made head coach during the 2012 season when Mike Lines was released. Bobby Keats had been a part of the coaching staff since 2011. My point is, except for McDade, these guys all coached a winning team. They coached the teams that went to the playoffs and the ones that didn’t.

I don’t feel the coaching is what has kept the Swarm from making the playoffs. I don’t feel it’s the players. You see them giving it everything each game. I can understand the philosophy of wanting to win, but with the constant changes, I don’t see it happening. The lack of playoff success has nothing to do with anything near the field and to get there, there needs to be a shift in organizational thinking. The team we have needs to be given a chance to be a team without a new piece every other week.