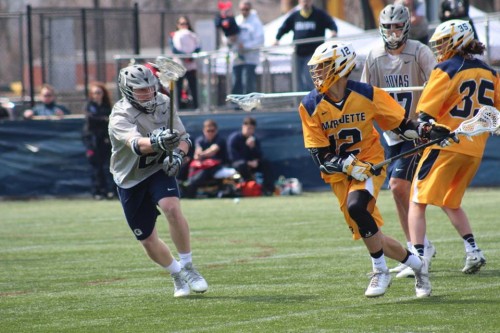 The Marquette Golden Eagles will host the first NCAA tournament game played in Wisconsin after clinching the six seed in this year’s road to Philadelphia.

No easy task for the Golden Eagles as University of North Carolina, one of four ACC teams in the tournament, rolls into Valley Fields for faceoff, Saturday, May 14, 1:30 p.m. Central Time.

North Carolina (8-6) makes its 31st appearance in the NCAA tournament, looking to hoist the trophy for the fifth time in school history. This is only North Carolina’s fourth time as an unseeded team.

University of North Carolina is led by Steve Pontrello who tallied 39 goals and 14 assists this season for the ‘Heels. Don’t let UNC’s record fool you, they are 3-1 against tournament teams including a one goal loss to Denver early this season. Wins over Duke, Richmond, and Notre Dame are worthy victories.

The winner of Saturday‘s meeting will travel to Columbus, Ohio to face the winner of Notre Dame/Air Force. That game will air on Espn2.