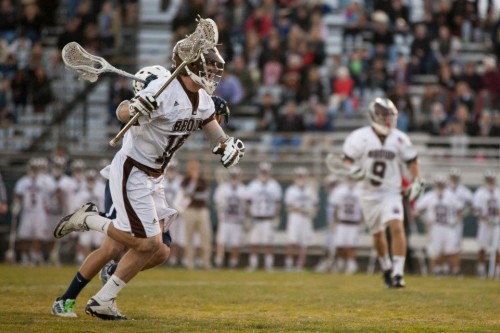 Johns Hopkins earned an at-large berth in the NCAA tournament and earned a road game versus the high scoring, fast paced Brown University Bears. This game has a similarity to another game that Hopkins faced in recent memory, 2008 National Final Four versus Duke University.

Brown comes into the contest after losing in the Ivy League Tournament Semi-Final against Harvard. The Bears come into the contest ranked no.2 in that latest national poll, losing two games this season by two total goals. The offense is average 16.75 goals per game, leading the nation.

What to do for Hopkins: Limit possessions.

The goal is to slow the most potent attack in the nation. A defense that has been susceptible at times this season is going to have their hands full with Brown’s offense. Junior Dylan Molloy has nearly as many goals (56) as Hopkins leading point scorer, Ryan Brown, has total points. Add the totals from all three starting attackman, Molloy (106), senior Henry Blynn (81), and senior Kylor Bellistri (56) and you get the total of 243. The entire Hopkins team has 282 for the season.

The defense is going to have to limit turnovers and transition. Clearing into the offensive end and valuing possessions are going to be key for Johns Hopkins. With a huge difference in numbers, Hopkins needs to hold onto the ball. Lasting possessions and grinding out chances will make it difficult for the Bears to get out and run.

The pair of sophomore Hunter Moreland and junior Craig Madarasz need to come up big for the Jays to find success on Saturday. Both have had their moments in games this season and the tide of momentum for the Jays has swung dynamically when they have been on. One of the two needs to have a big day for the Jays to find another week in their season.

What to do for Brown: Run.

A new goalie and a young defensive cast, leaves the Blue Jays with inconsistency against schemes this year. Some teams have found goalies easier than others, depends on which day you catch the Jays.

A stark contrast in style comes in from Brown’s up-tempo, goal-first pacing on offense to the Blue Jays more methodical style. The Bears can find holes in transition and in unsettled situations, which can be keyed from the lack of clearing ability by the Jays. If there is a save, or a ground ball obtained in the middle of the field, expect Brown to run.
Look for the defense to move the ball upfield quickly and leave Blue Jay midfielders expending extra energy to get off the field on defense as well. Without players like Joel Tinney, there are not many Blue Jays that will play both ends of the field. This can also cause transition is the substitution game by the Jays is not perfect.

In 2008, the Blue Jays were able to grind the Duke Blue Devils vaunted offense into chasing the Jays all game. In the end, the underdog made it to the Championship game, while one of the greatest teams offensively in NCAA history went home one game early.

The difference between Duke in 2008 and Brown in 2016 is that Brown is that Brown’s two losses were able to hit over 10 goals in the game. Duke in that season had two losses scoring under 10. What does this mean?

Brown is going to score and their opponents just had to score more than they did. Harvard and Bryant won their games against Brown by being one play better than the Bears. Turnovers will matter, ground balls will matter, and saves will matter just a little bit more when one goal could decide the contest.

Brown will want to run and Hopkins will have to unleash the horses likely to have a chance. Expect high scoring in the contest and hopefully the Blue Jays scorers, like John Crawley, Ryan Brown, and Shack Stanwick will be ready for the task at hand. If one thing can always be said about the Blue Jays is that they are always well prepared.

If they can execute to the same detail that they practice, this will be a tight game to open the run to Championship Weekend. Otherwise, this is the opportunity to get out of hand quickly.