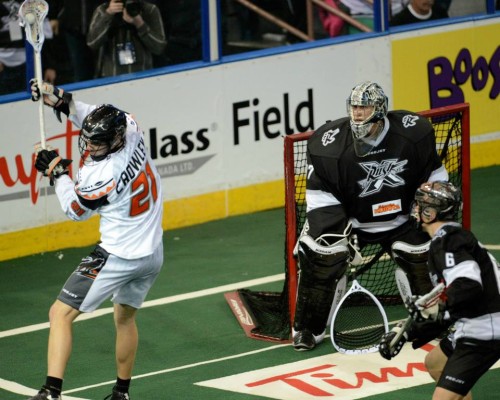 Toronto Rock Owner, President and GM Jamie Dawick has announced a trade with the New England Black Wolves that sends forward Kevin Crowley to New England in exchange for forward Dan Lintner and the higher of two 2016 second round picks currently owned by the Black Wolves. The trade is pending league approval.

Lintner was selected in the first round of the 2015 NLL Draft by New England just a couple of weeks ago. In many recent years, the right-handed offensive threat may have been a top-five selection but was nabbed eighth overall in an absolutely loaded draft class.

The Rock originally acquired Crowley from the Black Wolves at the 2015 NLL trade deadline in March in exchange for Garrett Billings. Crowley now returns to the franchise where his NLL career began after being the first overall pick in the 2011 NLL Draft.

“We made the trade for a lot of reasons,” said Dawick. “Kevin’s working and living situation has come in to play and this move is a good fit for him as well as the Toronto Rock. We’re not trading him because he didn’t perform here, he was a big part of our run to the Champion’s Cup final. New England didn’t really want to give up Kevin last year and we’re not far off with this deal from what was also on the table at the trade deadline in March. We needed a player last year so the 2016 first round draft pick didn’t make sense at the time. I wish Kevin nothing but the best.”

As many fans may recall, there was a serious amount of discussion between Dawick and Black Wolves’ GM Rich Lisk on the draft floor prior to New England making their first round selection at the recent NLL Draft.

“This deal was on the table at the draft,” explained Dawick. “It didn’t get on the table until there were just a few minutes before New England’s first round pick at the number eight spot. I didn’t feel comfortable making the deal without having a little more time to evaluate the big picture. New England took Lintner with their pick, which was the guy we would have selected. By them taking him, it kept everything alive. We moved Garrett Billings to get Crowley and when you’re moving highly talented guys, you have to be comfortable. We had some time to do some more homework and we feel like we’re in a really good spot with this deal coming to fruition.”

While playing for the Whitby Warriors, Lintner put up eye-popping goal totals over each of his last three seasons in the Ontario Junior A Lacrosse League (OJALL). From 2011 to 2013 he scored 54, 49 and 50 goals over those three seasons, the most of any player in the world’s top junior lacrosse league. His 153 goals were more than established NLL stars Dhane Smith (136, now with Buffalo) and Johnny Powless (149, now with Georgia) over that same time.

Along the way, the 23-year old from Courtice, Ontario won two Minto Cup Canadian Junior A lacrosse championships (2011 & 2013) and was named the Most Valuable Player in the Warriors’ 2013 Minto Cup victory. During that run, Lintner added 46 OJALL playoff goals to his 50 regular season goals for one of the best OJALL seasons in recent memory.

“I’m really excited to bring in a player like Dan. He was an elite Junior A player and a character guy from what I’ve been told. This is a good deal for both the present and the future of the Rock,” said Dawick.

The 23-year old Lintner played the last two seasons of summer lacrosse with the Brooklin Redmen of Ontario’s Major Series Lacrosse (MSL). Unlike Smith and Powless, Lintner played outdoor lacrosse collegiately in the NCAA Division I ranks, making him eligible for the 2015 NLL Draft whereas the previously mentioned players elected to go straight to the pros at 18 years of age. Lintner’s college career spanned four years at Cornell University.

Completing the deal, the Rock will receive the higher of two 2016 second round draft picks currently owned by the Black Wolves. New England holds their own second round pick and the Rock’s, which was acquired as a part of a previous transaction.

Lintner will join his new Toronto Rock teammates at training camp, which opens on Saturday, November 28th at the Toronto Rock Athletic Centre. Earlier this week, the NLL announced the Rock will be a part of an exhibition game at Ottawa’s TD Place against the Saskatchewan Rush. The December 5th game will open up the Rock’s three-game preseason schedule. More details will be announced shortly regarding the Rock’s full preseason schedule and training camp.