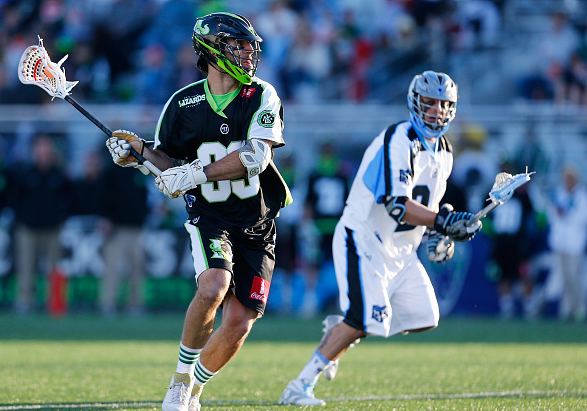 Ohio and Rochester met for the second time in two years to determine who would advance to Championship Weekend.  Both the Rattlers and the Machine possess powerful offenses that can go on runs and put points on the board at an amazing clip.  It was the defenses however that dominated this matchup as the Rattlers won 12-8.  The sound of stick on pad and flesh filled the air in Selby Stadium and it set the tone for a tough defensive battle.  Ohio took an early first quarter lead on the strength of a Tom Schreiber 2 point goal in the first quarter.  The Rattlers responded by reeling off three goals in a row to take a brief lead in the second , but the Machine’s do everything midfielder, Jake Bernhardt, scored to tie the score at halftime.  Rochester came out hot in the third with two scores in a row and seemed primed to pull away, but Brian Farrell, Ohio’s towering defenseman, scored a transition goal to keep it within one point.  The Rattlers scored the next three goals and then the Machine responded two scores to end the third.  Both defenses dug in for the fourth quarter and there was not a score until 7:49 when Dave Lawson scored off a Mark Matthews feed.  Rochester scored again in the fourth quarter while the Machine offense was scoreless.  Ohio won the face off battle as Greg Puskuldjian went 15-23 at the X while Mike Poppleton won 8 draws.  John Galloway was a wall and turned away 15 shots which was one of the main reasons for the Ohio scoring drought.  Brian Phipps made 9 saves for the Machine.

In the third meeting between Boston and New York, the Lizards appeared to still be in the lethargic funk that has been affecting them for the past few weeks as the Cannons jumped out to a 3 goal lead.  Boston seemed determined to end New York’s dominance over them and keep from being swept.  The Lizards were scoreless in the first quarter and even Greg Gurenlian was struggling at the X as Cannons rookie Joe Nardella found early success against the Beast.  For the briefest of moments it appeared as though New York’s season would end as the Cannons came out of the gates firing on all cylinders.  JoJo Marasco scored New York’s first goal in the second quarter, but Boston answered with two more goals.  New York’s offense came to life after Marasco’s goal as the Lizards scored three in a row. Boston scored again, but New York went on another three goal run to gain a halftime lead.  The Lizards continued their scoring in the third as they dominated the third quarter outscoring the Cannons 5-1.  New York appeared to have the game in hand, but Max Seibald led a Cannons barrage in the fourth with two 2 point goals as Boston reeled off 8 goals to tie the game.  Rookie John Glesener had a rough start to the game after his stellar performance last week, but managed to score the last two goals in the fourth to tie the game and send it to overtime.  Boston won the opening face off in overtime and called time out to set up their offense and they were turned away by Drew Adams as made his most important saves of the night.  Adam Ghitelman led a transition break and took a feed from Scott Ratliff and took a shot on goal.  Adams made the save and it keyed transition that led to the game winning goal.  Adams finished with 20 saves on the night while Boston had Adam Ghitelman relieve Jordan Burke in goal.  This game was an instant classic and had many subplots that entertained fans and hopefully made new ones.  New York avoided self destructing as they took Boston’s best shots (2 point shooting and man up offense) and are going to Championship Weekend.

The Championship in Kennesaw between New York and Rochester takes on a New York theme as the rivalry of Upstate versus Long Island heats up for this meeting.  The Lizards swept the Rattlers in the regular season, but Rochester is at full strength and even the loss of Mike Manley, last season’s defensive player of the year, their defense managed to contain Ohio’s high powered offense.  That defense will be tested by the Lizards’ high powered offense.  Gurenlian gives New York an advantage at the X, but look for Rochester to double pole the wings with LoCascio and White.  That unfortunately leaves a short stick on one of the Lizards’ attack and given Gurenlian’s dominance this season it will make for a long day on defense if the Rattlers cannot cage the Beast.  The Lizard’s task on offense is not an easy one as they face a stone wall in John Galloway and the Rochester defense. New York cannot afford to get into foul trouble because of the talent Rochester has on their man up unit.  Championship will be a clash of two powerful offenses and two incredible goalies.  Time of possession will determine the winner and it appears that the Champion will be from the state of New York.