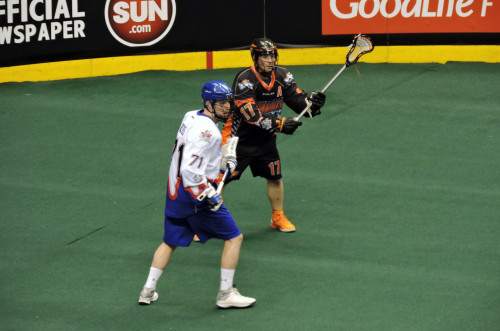 The Toronto Rock kept their playoff hopes alive on Friday night at the Air Canada Centre as they took down the first place Buffalo Bandits 12-9. The Rock took the first game of this weekends home and home series despite their patchwork lineup.

Down 7-5 at the half, the Rock rallied for three straight goals in the third and kept the Bandits off the scoresheet to take an 8-7 lead. The Bandits then shot themselves in the foot with five minor penalties in the fourth quarter. The Rock capitalized twice on the power play and twice at even strength while the Bandits only managed another two.

Acting captain Josh Sanderson was happy the team was able to get a win in their last regular season home game.

“It was a great win, it was a good game,” he said. “[Buffalo is] a good team, they really transition the ball well, and obviously we kept Dhane (Smith) in check which was huge. We got the offense going, I thought we were getting good chances in the first half and then it got going in the second half… It was pretty solid once we got going and obviously the D and Rosey held them to a good number.”

“We’re playing a desperate team and we knew that going in,” he said. “We always match up against [the Rock] really well. I think on our end we just came out a little bit flat, maybe a little over confident and any time you do that in this league the teams are all good enough to beat you on any given night.”

Kasey Biernes led the Rock with three goals and two assists. Rob Hellyer had two goals and five assists and now sits at 95 points on the season. Rookie Dan Lintner had his best game of the season with two goals and three assists. Jesse Gamble had two great transition goals with one assist. Turner Evans opened the game’s scoring and nearly added a second goal as he flew over the crease and whacked Anthony Cosmo in the head. The goal was called back after Evans landed in the crease behind the net. Josh Sanderson had a goal and three helpers, and Stefan Leblanc had a goal and two helpers.

Mark Steenhuis led the Bandits with two goals and two assists. Chad Culp had two goals and one assist, including a highlight reel behind the back no-look shot that was already given the second spot on SportsCenter’s plays of the night. David Brock, Ryan Benesch, and Dhane Smith all had one goal and one assist each. Nick Weiss scored one goal early in the first quarter on an unassisted transition effort. Callup Adam Will scored in his first NLL game.

For the Rock, the good news is that they played their best game in ages, with everyone contributing and everyone pouring all their efforts onto the floor. Their combined efforts, alone with another stellar game from Nick Rose in goal, held league leading scorer Dhane Smith to just one goal and one assist.

With such a patchwork roster, limiting Smith’s effectiveness was a huge coup for the Rock. Steenhuis said the Bandits didn’t help themselves either.

“I don’t know if we were completely surprised [by their defense], I think we kind of veered from our game plan a bit. They obviously played really well so we’ll give them the credit they deserve but on our side we have to do a lot more, we have to work a lot harder, and there are definitely some things we have to change for tomorrow night’s game.”

“It was a great win for us,” stated Rock head coach John Lovell. “Unfortunately there’s another downer in our dressing room but it goes without saying every game seems to be something.”

The bad news is that the Rock have lost yet another defenseman, at their most critical point of the season. Five seconds in to the third quarter Brock Sorensen went down with his left leg at an odd angle. He was helped off the field by teammates and training staff and did not return. He’ll join the other nine Rock players on the IR/PUP. Lovell was tight lipped about Sorensen’s injury after the game although it’s quite likely the extent isn’t known yet. Lovell did praise his team for rallying after the injury.

“It was a character win, especially being down at the half. We dug down and got some belief and even played harder after Brock went down so it’s a credit to our guys and being a team and fighting for a teammate. Our guys believe in team and they believe in hard work and they believe in character and all of those things. There’s always something to play for and that’s the name of the game. You don’t pack it in, you have to keep playing.”