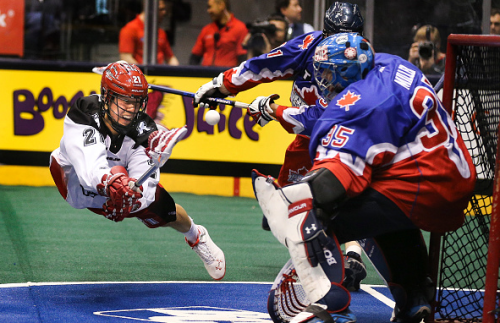 Nobody’s discounting the Rush or Roughnecks, but with the Toronto Rock’s determination and the Rochester Knighthawk’s history, the two game east semi-final is shaping up to be a true epic.

The Rock have played this season for Terry Sanderson, their former General Manager who passed away last November. Their determination to bring a championship to Toronto for Terry has been evident in every game they’ve played, and led them to a first place NLL finish with 28 points, 14 wins and four losses. They enter into the playoffs versus Rochester on a high, ready to compete for the trophy they last won in 2011 before Rochester “three-peated.”

By virtue of their first place finish, the Rock had last week off to rest while the Knighthawks disposed of the Bandits. The break was opportune for the Rock to allow second leading scorer Rob Hellyer more recovery time. Hellyer missed several games in March/April with an upper body injury. Hellyer and Josh Sanderson have been an unstoppable duo this season, combining for 192 points in just 32 games.

Sanderson is having a career year, his 17th in the NLL. He set a record for most assists in a season with 83, the first year of his playing career without his father, Terry. Sanderson didn’t expect to keep up the scoring pace he started the season with, but has proven himself wrong, as he finished sixth in league scoring.

Familiar foes will be in goal in this series. The Rock’s Brandon Miller and Knighthawk’s Matt Vinc most recently faced off in the MSL final for the right to host last season’s Mann Cup. Miller (in relief of Evan Kirk) came out on top, although by only a slim margin. Miller and Vinc are capable of putting on spectacular displays of goaltending. Miller split time with Nick Rose in Toronto’s net, and Rose is as equally capable of magic with the Toronto crowd behind him.

Toronto fans are hungry for a championship in their city, and the Rock organization is doing their best to fill the Air Canada Centre. Newsletter subscribers were offered a two for one ticket deal prior to the public sale of tickets. The team is also hosting a playoff viewing party for game one at Shoeless Joe’s in downtown Toronto, to help build interest for game two.

Rochester will be a tough team to beat, but Toronto has to look past the face that Rochester is the three time defending champion. For their part, the Knighthawks have been in this position before and know what to expect. Their biggest obstacle is Toronto’s determination, the hardest intangible to beat. On top of that, Toronto built for this season. They’re a highly skilled, quick team that will really put Rochester to the test.

In the regular season, the Knighthawks held the advantage 2-1, but playoffs are a whole different animal.

Fans should be prepared for an absolute battle between these teams.

The Rock open the playoffs on the road in Rochester on Saturday for game one. Game two, and the 10 minute tie breaker mini game, if necessary, are in Toronto on Saturday, May 23.