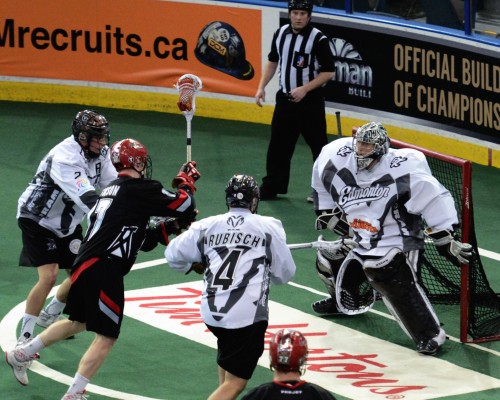 The Calgary Roughnecks travel up the road to Edmonton to face the Edmonton Rush in Game 1 of the West Division Finals on Friday night, beginning a rematch of the 2014 Division Finals.

Last year the Roughnecks upset the odds-on favourite Rush, splitting the two full games and then convincingly winning the tie-breaking mini-game. This year Edmonton is once again the favourite, but Calgary is looking to once again win this Alberta battle.

Roughnecks forward Shawn Evans shattered the NLL record for points in a season this year, scoring 130 points and is, in my opinion, a shoe-in for his second MVP award in three years.

The Rush, meanwhile, have won more games in the last two years than any other NLL team and are itching to get back to the Champion’s Cup after making their first appearance in the finals just three seasons ago.

Mark Matthews broke the 100-point barrier for the first time this year with 115 (Second best in the league behind Evans) and continues to get better and better every year. On the other end, goaltender Aaron Bold led the league in goals against average (9.44) for the second year in a row.

An X-Factor for Edmonton is the fact that forward Robert Church was placed on Injured Reserve on May 1 and has not yet been cleared to play. The sophomore forward was second on the team in scoring with 92 points; taking him out of the equation could leave the Rush vulnerable.

The Rush led the NLL in goals for (241) and were second in goals against (177), making them one of the most formidable foes in the league. If they put all the pieces together during this playoff run, it’s difficult to imagine anyone challenging them.

The two teams split their season series this year, with each team winning two games. Three of the four games were decided by two goals or less, with their first matchup of the season being a blowout in Edmonton’s favour by a 16-8 margin.

The Rush finished the regular season by winning four straight; the Roughnecks have now won five of their last six.

When you add everything together, it looks like Edmonton should have the edge in this series, but Calgary has shown serious resiliency late this season and can’t be counted out of any game, especially if Evans has anything to say about it.

The Rush host the Roughnecks Friday night at 9:30 pm ET in Rexall Place.