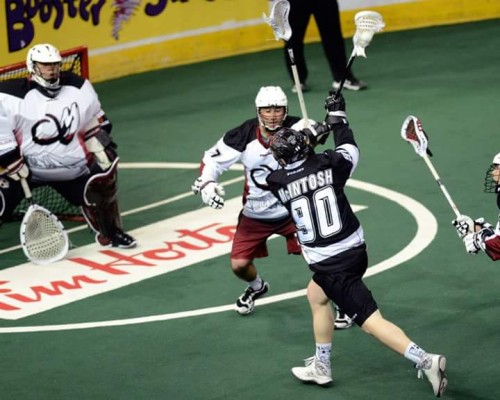 Although the Rookie of the Year nominees won’t be revealed until tomorrow, we can still take an educated guess at to who the candidates will be.

Third pick overall Miles Thompson had a great rookie season for the Minnesota Swarm with 27 goals and 62 points. Thompson was second on the Swarm in both categories and 28th overall in the NLL. His strong rookie campaign bodes well for his ability to contribute to the Swarm for years to come.

Consideration should also be given to Colorado Mammoth standouts Robert Hope and Jeremy Noble. Hope, the seventh overall pick, had a solid year as part of the Mammoth defensive unit, collecting 72 loose balls and forcing 28 turnovers (tied for eighth-best in the NLL in that category). Second-overall pick Noble, acquired at mid-season from the Rochester Knighthawks, racked up 39 points in just nine games after refusing to report to Rochester due to work commitments.

Right at the top of the list should be Ben McIntosh of the Edmonton Rush. The first pick overall led all rookies in scoring with 37 goals and 86 points while playing in all 18 games for the eventual Champion’s Cup winners. McIntosh should be a shoe-in to win the award.