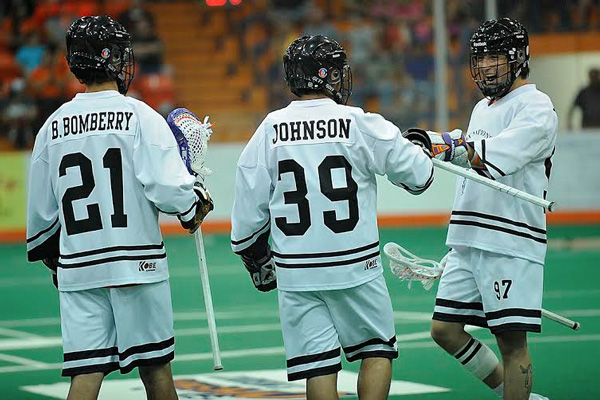 Following one round of OLA Junior “A” playoff action, the four top teams from the regular season remain. The top seeded and defending Minto Cup Champion Six Nations Arrows made quick work of the eighth seeded Burlington Chiefs, sweeping them four games to zero. However despite the four game sweep, the Chiefs gave Six Nations everything they could handle, almost stealing games on two occasions.

The second seeded Peterborough Lakers also swept their first round series, defeating the Barrie Lakeshores four games to nothing. While games one and two were closely contested, the outcome was never in doubt for the deep and talented Lakers, as they closed out the series with two dominating performances.

The third seeded Brampton Excelsiors knocked off the young and talented Toronto Beaches in four straight to earn their berth in the second round of the OLA Junior “A” playoffs. The Excelsiors avoided a near loss in Game 1, however after squeaking out their Game 1 victory, the Excelsiors got back on track picking up three straight impressive wins, where the outcome was never in doubt.

The tightest of the four opening round series saw the Whitby Warriors narrowly defeat the Orangeville Northmen in six hard fought games. With the exception of Games 2 and 3 the two teams battled in four closely contested games, where both teams could have easily came out victorious. With the Warriors advancing in six games, the final four are set: Six Nations will take on Whitby, while Peterborough and Brampton will hook up in the other OLA Junior “A” Semi-Final.

For the fourth time in the last five seasons the Six Nations Arrows and Whitby Warriors will meet in the OLA Junior “A” Playoffs. The two teams have created arguably the most fierce rivalry in the Ontario Junior A ranks over the last five seasons as the Warriors and Arrows are responsible for three of the last four Minto Cup Championships. While the teams last two playoff meetings have came in the league final, 2015 will see the clubs lock horns a series early, with a spot in the aforementioned final on the line. The two clubs split the season series, with both games being decided by just two goals, and the visiting team picking up wins on the home team’s floor. While the Arrows finished 12 points ahead of the Warriors in the standings this season, the Warriors played the Arrows hard both times, scoring a victory at the ILA on June 21. While both teams are loaded with offensive talent, this series will ultimately come down to which teams plays better defense, and what goalie can lead his team to victory.

The Arrows have an advantage in goal, as Goaltender of the Year Doug Jamieson led all goaltenders in Wins, Goals Against Average and Save Percentage during the regular season. Still it’s a narrow advantage, as Warriors netminder Mike DeGirolamo finished right behind Jamieson in regular season goals against average and currently leads the OLA Junior “A” playoffs in in all goaltending categories. If DeGirolamo can play with consistency throughout round two, the Warriors chances of an upset go up a significant percentage. Defensively the Arrows allowed a league low 119 goals during the regular season and just 24 through their four game series with Burlington. Meanwhile the Warriors finished right behind the Arrows in goals against during the regular season with just 157. However the Warriors defense was exposed at times during the Orangeville series, but found a way to pick it up in the clutch. The Warriors will need to play with consistency on the back end as the Arrows boast quick strike ability on offense, and a brief lapse defensively could hand the Warriors a loss. Offensively, Whitby and Six Nations are both extremely deep, however if the Arrows defense is able to keep the ball out of Ryan Keenan and Austin Shanks sticks they then hold a distinct advantage as the Warriors other offensive players struggle at times to create offense for themselves. The Arrows will need to lock down the Warriors transition game if their to be successful, as the run and gun style can give opposing teams fits.

Ultimately I expect the depth of the Arrows offensive, coupled with their stingy defense and MVP caliber goaltender to be too much for the Warriors who just went through a war with the Orangeville Northmen. The Warriors will play the defending Champs tough and will steal a couple games making the series an interesting one that comes right down to the wire.
Predictions: Six Nations in Six

Unlike the Arrows and Warriors, the Peterborough Lakers and Brampton Excelsiors haven’t met in the playoffs much over the last five years. The only playoff match up between these two teams came during the 2011 season when the fifth seeded Lakers swept the fourth seeded Excelsiors three games to zero. Also unlike the Arrows and Warriors there isn’t much of a rivalry between these two teams, although that is sure to change after what’s expected to be a lengthy and heated series. The Lakers and Excelsiors finished just four points apart in the regular season standings, and split the season series, with each team claiming victories on their home floor. Still the two teams we’ll see compete in this second round series will be much different than the teams that squared off against one another during the regular season, as the teams met in just the second week of the season for a home and home series. Since then the Excelsiors have added Cole Kryworuchka, Brett Hawrys and Jeremy Roe from the B.C. Junior A Lacrosse League. While potent offensive threat Holden Cattoni has returned from John’s Hopkins for the Lakers and Junior B call up Fred Hartley has made contributions in his brief time with the club. Both teams have had inconsistencies throughout the regular season, as Peterborough got up and down efforts in goal at times, while the Excelsiors defense and goaltending could never seemed to be on their games at the same time. This series should come down to which team’s defense can shut down the opposing team’s potent offense, as both teams boast an offense that is eight players deep.

In goal things are fairly even as despite struggles from both Quintan Martin (Brampton) and Brett Lafonte (Peterborough) at times during the regular season, both netminders have been excellent through one round of playoff lacrosse. Lafonte may be the hottest goalie in the loop right now, while Martin has the ability to steal games. With no real advantage in goal, if you had to give a slight edge to one of the two sides, you’d have to give it to the hot goaltender in Brett Lafonte of the Lakers. Defensively the Lakers hold an advantage, however the Excelsiors D-Core has tightened with their B.C additions. Nonetheless the Lakers physical, tenacious defense should be able to get the upper hand the Excelsiors offense. Offensively these two teams are very dynamic, and very deep. While Cam Milligan and Holden Cattoni undoubtedly lead the Lakers offense, guys like Kyle Killen, Jake Fox, Zac Currier, Dan Michel and Ethan Walker can explode at any time. The same can be said for the Excelsiors, as Jeff Teat is their unquestioned offensive leader, however Philip Caputo, Clarke Petterson, Brett Hawrys, Tyson Gibson and Zach Herreweyers have all exploded offensive on more then one occasion this season.

You can expect this series to be a lengthy one, with home floor playing a large factor. Both teams are both so deep and talented and both could easily find themselves hosting the Minto Cup when it’s all said and done, however given the Lakers hot goaltending, physical defense and potent offense, I have to give the very narrow edge to the Lakers in this OLA Junior “A” Semi-Final.
Prediction: Lakers in Seven