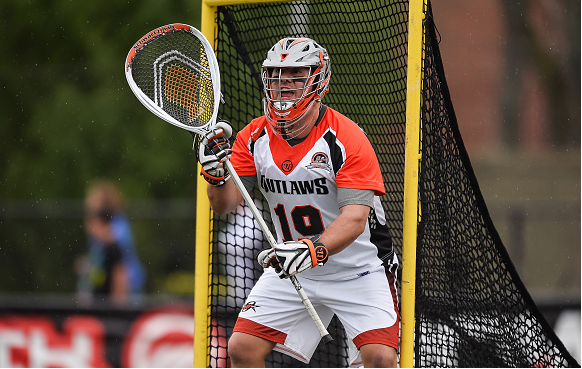 As the final round of The Open wraps up on this Monday, let’s remember an old Scottish adage: “There can be only one.” Of course, by “old” I mean from the film Highlander in 1986. Florida brought their three-game winning streak into Mile High stadium only to have their progress halted.

The first half was a back and forth affair. Neither team dominated play; instead what fans were treated to was a welterweight fight as the two teams exchanged body blows for a full thirty minutes.

The first quarter had a Miles-to-Lyle tally and a Lyle-to-Miles score, but the Thompson duo was kept off the score sheet until the fourth quarter, when Lyle dished a helper on Connor Buczek’s two-point goal. The Thompson’s still had their chances, they just weren’t able to convert. Miles had a couple of behind the back/over the shoulder shots that missed the mark, and once or twice he was fed on the crease, but bobbled the pass.

Some serious dap goes out to Dillon Roy who had the tough assignment of wrangling Lyle Thompson. Lyle was able to ply his trade admirably in the first quarter, but Roy seemed to get everything dialed in after then. What is it about playing in Mile High that is anathema to Lyle?

Kiernan McArdle led the Launch’s scoring with four goals, bringing his season total to a league-leading 43 on the season. Connor Buczek also notched four points in the game on a goal, a 2-bomb, and an assist.

Denver finally put together a solid game from end to end. The Outlaws’ offense was humming early, but really revved up in the second half, outscoring the Launch 11-7 over that span. Seven of those Denver goals were scored by someone with the name Bocklet on the back of their uniform.

To say this was a Bocklet breakout game would be a bit of an understatement. Bocklet the Eldest (Michael) finished the game with 10 points (5, 5) while Bocklet the Youngest (Chris) racked up eight points of his own (7, 1). One would think that practicing against the Florida attack that the Launch defense would be more adept to defending tic-tac-toe passes, but this was not the case on Sunday as the Bocklets, and Outlaws in general, tore Florida’s defense apart piece by piece.

While his brothers engaged in a passing and shooting clinic at the other end of the field, Matt Bocklet, moved from LSM to close defense for this game provided the blend of speed and agility to rein in Florida’s potent attack unit.

Both teams played both goalies from their featured tandems. Austin Kaut started the game for Florida, and faced 28 shots in his three quarters of work. The former Nittany Lion allowed 15 goals, and stepped aside in the fourth for Brett Queener. Queener saw 8 shots and allowed 5 goals. Of course, one of those he never had a chance on because he was scrambling back to the cage after clearing the ball himself and wasn’t able to get set.

On the Denver end, it became clear early that the defense played better. Perhaps, moving Matt Bocklet to close defense should have been attempted earlier in the year. (Note: Max Schmidt replaced Bocklet on the faceoff wing for much of the game.) Schwartzman made 8 saves on 15 shots in the first half, and Dillon Ward earned 4 saves on 10 shots in the second half.

Perhaps the most curious aspect of the game was the faceoff battle. Denver claimed Brent Hiken from the player pool and neither Geoff Snider nor Anthony Kelly dressed for the Outlaws. Hiken took the bulk of the draws going 14-for-26 in his first game back in the bigs since last year. Michael Simon, who has been a stopgap drawman went 6-for-11 at the dot.

On the Florida side, Chris Mattes won 15 of 28 draws, but Head Coach Stan Ross opted to give Thomas Croonquist a number of reps as well. Croonquist went 2-for-9. With Mattes playing so well at midfield, it’s interesting that Ross elected to mix up the rhythm of his draw team, especially since Croonquist fared so poorly.

Based on the first half, it seemed this game would be a shootout. The fact that it turned into a blowout in the second half is a testament to the solid defensive effort turned in by the Outlaws.
Box Score