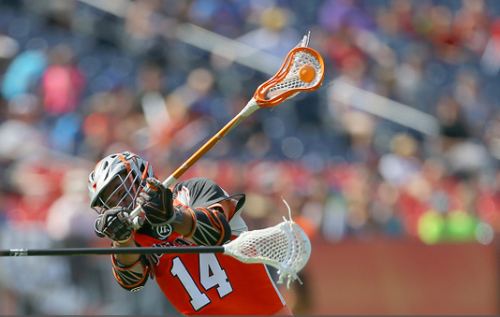 The Ohio Machine traveled to Denver to Sports Authority Field at Mile High to take on the Outlaws in their season opener.  This was a tale of two teams that went in different directions last season.  The Machine appeared to be the favorites against the home team as Denver suffered an uncharacteristic 2015 where they failed to make the playoffs.  Jesse Schwartzman announced his retirement, the defense struggled with consistency after Lee Zinc retired post championship, and face offs were done by committee as injuries decimated the Outlaws at the X.  Ohio made the playoffs last season and defeated the Florida Launch at home for the first time and looked to be firing on all cylinders to make a deep run into the playoffs and challenge for a Steinfeld Cup.  This looked especially true as the Machine led for most of the game, but fell to the Outlaws as the home team won 17-16.  Denver kept the game close and managed to close out the victory behind a fourth quarter where Ryan Laplante made 4 saves, the defense held Ohio to 2 goals and the offense scored 5 goals.

Ohio came out strong in the first quarter despite giving up the first goal to Drew Snider.  The Machine reeled off 3 goals six and a half minutes into the quarter to take the lead until Michael Bocklet buried a pass from Brent Hiken to stop the visitors’ run.  Kyle Harrison responded with 2 point goal and Marcus Holman caned a power play goal to end the scoring in the first and put the Machine up 6-2 and leave many Denver fans wondering if another long season was ahead of them.  The Outlaws responded in the second with 4 straight scores until Marcus Holman scored for the Machine and put an end to the Outlaws’ run.  Denver’s offensive outburst turned the momentum and put the Outlaws in a position to win.  The teams then traded goals to end the half with the Machine leading 8-7.

Ohio opened the second half by scoring first and totaled six goals in the third quarter as Denver kept the game close by scoring 5 third quarter goals.  The pace of the third was high as only one of the 11 third quarter points was assisted.  Much like the semifinals last season the Machine struggled scoring points in the fourth quarter as they could only score two goals.  For the second straight week, Adam Fullerton started in goal for the Machine as Scott Rodgers battled a nagging injury. He faced 30 shots on goal and made 14 saves mainly in the first and third quarters (7 & 5 respectively), but on made 1 save in the both the second and fourth quarters.  Ohio played almost penalty free for the whole game with only a one minute illegal stick penalty on Billy Bitter in the third quarter.  Bitter led the Machine scoring with 3 goals followed by Holman, Stanwick, Baum, and Harrison with 2 goals each.

Uncharacteristically Ohio found themselves on the other side of the face off battle as Denver’s Brent Hiken and Thomas Kelly went 21-35 against Greg Puskuldjian to take the edge in that category.  Ryan Laplante made his first MLL start with 17 saves on 32 shots and gave up one 2 point goal.  After this game he appears to have a solid hold on the starting role in Denver.  Offensively, the Outlaws were led by Drew Snider with 5 goals, including the game wining 2 pointer, Michael Bocklet with 4, and Eric Law with 3.  Denver addressed their holes from last season, got in a shooting match with one of the more powerful offenses in the league and came out on top.  Along with the 2-0 Charlotte Hounds, Denver may be the turnaround team of the season.  These teams face each other this coming weekend as Denver looks to build on their first win and Ohio looks to rebound from their fourth quarter funk.