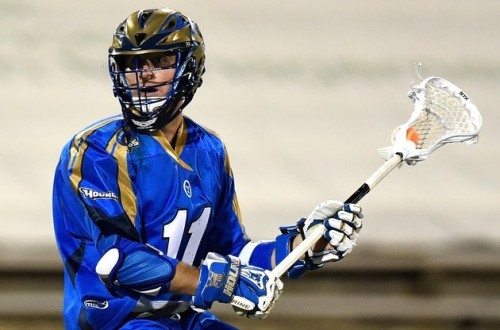 There was a lot of movement around Major League Lacrosse since last August as the Atlanta Blaze came aboard and many players changed teams. The biggest off-season move may have been the Charlotte Hounds addition of Jim Stagnitta as head coach. Stagnitta had already been a success in the league earning Coach of the Year honors during his two seasons in Denver where he won 26 of the 30 games he coached.  He spent the 2014 season on Stan Ross’ staff in Florida, but was not in the league last season.

When he took a call in the off-season by Hounds General Manager (also the head coach at the time) Mike Cerino, Cerino was looking for some feedback on potential college players to draft. During the conversation, Stagnitta mentioned that he was interested in getting back in the league, even if it meant being an assistant coach. What he did not know at the time was Cerino had already made plans to step away from the sideline and concentrate on building the Hounds as GM only. Cerino himself had a good run as head coach and knew he could not pass up the chance to bring a proven winner like Stagnitta to the Queen City. Cerino not only offered Stagnitta an opportunity to get back in the league, but gave him the keys to a very talented, young roster.

Although the season is still in its infancy, the Hounds are 2-0 for the first time in franchise history. The Hounds were last in the league in with 160 goals in 2015 limping to a 3-11 season. But, a core of uber talented young players are already beginning to excel in an offense Stagnitta said is part by design and part freelance. The Hounds have already scored 29 goals in the first two games. On our broadcast post-game, we discussed how the offense kept Rochester guessing with their off-ball movement and Stagnitta admitted that at some times he was not sure himself what they were doing. For a long time defensive coach, the ability to let his young stars take ownership of the offense is a path to success. As the Hounds get more comfortable playing for Stagnitta, good days are ahead in Charlotte.

Drew Snider, Denver. The veteran had a career high eight points on five goals (one 2-pointer) and two  assists including the game winning 2-point shot with a minute and a half to play vs. Ohio.

Max Siebald, Boston. Siebald assisted on Will Manny’s eventual game winner and led the way with six points on four goals (one 2-pointer) to go along with the assist.

Matt Abbott, Chesapeake. Abbott had five points (four goals and an assist) stepping in for Matt Danowski who was not in the lineup as the Bayhawks improved to 2-0.

Joey Sankey, Charlotte. The second year star had three goals and two assists. He led an offense that kept the Rattlers defense on their heels trying to figure out if Sankey would dodge, shoot, or dish.

3- Denver (1-0) Thrilling come from behind win over Ohio.

7- Rochester (0-2) Struggling at the X similar to last season.

9- Florida (0-2) Launch will heat up once Thompson get there.