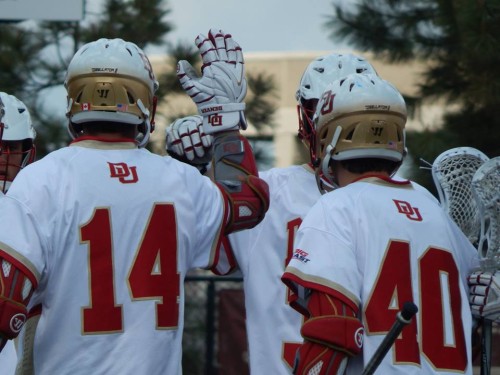 We’re in the midst of an exciting two week lacrosse period for Denver men’s lacrosse as they play back to back games against 2015 postseason opponents. Zach Miller sealed the deal for DU last week against Notre Dame in Indiana with a 9-8 overtime victory. This weekend, the Pioneers host the Ohio State Buckeyes, who briefly looked to be the team to send Denver home early in the 2015 Quarterfinals hosted in Denver, Colorado last season.

The Buckeyes are back in town for a showdown against the 19-game winning streak Pioneers. This time, stakes are different.

Less than a year ago, Ohio State came into Sports Authority Field at Mile High Stadium with a powerful message: we’re legit, and going to make you work. Ohio went on a power performance in the first quarter of that quarterfinal game bringing the score to 1-6 in their favor by the end of the first period. Denver made a huge comeback in the second and third quarters, and had a scare in the fourth as Ohio drew the score closer. Denver was able to come out on top by a mere two points to continue on a trip to the championship, and now a 19-game winning streak.

Denver stands at No.1 in the country after upending No.1/2 Notre Dame last week, and are playing on par to last year.

Connor Cannizzaro continues to lead the Pios with 26 points so far this season (15G, 11A). Four other Pios are in double digits points this season, including Tyler Pace (21 points), Zach Miller (17 points), Jack Bobzien (14 points) and Brendan Bomberry (13 points). 15 different players have scored so far in 2016.

Zach Miller has stepped up this season in place of Wes Berg with great game winning goals and slippery penetration of the opposing defense. Freshman Nate Marano continues to concern opponents with his young talent, and Cannizzaro turns a battle at X-behind into a great dance every game, tripping up defenders and making them double-check their abilities to play behind.

The Pio’s are far from perfect this year, and overall consistency in games is beginning to be questioned. The offense has had trouble controlling the ball all season. Tons of dropped passes, missed feeds and an inability to control game tempo have surely concerned Tierney throughout this season. Tierney is big on controlling game clock and pace. His expressions in any given game are hints to his comfort level with the squad’s 2016 performance.

Defense has also had its struggles. For one, they aren’t causing turnovers at the same rate as opponents, which also plays into the regularity factor for Tierney. DU has caused 22 turnovers so far in 2016, compared with 37 by other teams.

A big issue spectators are noticing is DU’s clearing. They currently sit at a .774 clear percentage on the season. That’s not a bad rate, but opponents are clearing successfully nearly 90% of the time and teams like UNC and Notre Dame gave Denver a run for their money on clears. Two weeks ago, UNC entirely shut down two or three of Denver’s clears.

Alex Ready’s save percentage is only a .515. For a freshman from Pennsylvania playing at such a high level, it’s a great ratio. For a goaltender on the DU squad, he has a lot of work ahead of him. There are times when Ready is caught out of position, or can’t stop a perimeter sniper up high, which are usually easier saves.

Ohio, on the other hand, may give Denver a midseason test this weekend. They started the 2015 season 5-2 when they played Denver in regular season. This year, they travel to the Mile High city with a record of 5-3. Looking at their schedule, the Buckeyes seem to perform either excellently or not, as the outcomes of all their games are approximately 3-5 point differentials.

To start, Ohio is coming off a one-point overtime loss to Towson. That’s not to discredit the Buckeyes as the Tigers have been making ripples and waves this season already. However, that means Ohio is hungry for their next victory.

Ohio has six players having season points in the double digits with Austin Shanks leading the stats race. Unlike Denver, Ohio’s stats leaders are very close in numbers, showing a great team effort that’s obviously effective. For a team like DU who has had trouble defending the middle of the field from cutters and assisted-dump goals, Ohio will find great strength in taking advantage of that scenario.

The Buckeyes have more than double the number of caused turnovers, and with DU’s consistency struggles this season, that’s a major concern. To counter that, OSU has the same amount of turnovers as DU, at 89 on the season. Ohio is also clearing much more successfully than the Pio’s with a percentage of .922.

With Ohio averaging 34 shots per game and a .599 shot-on-goal percentage, Alex Ready and the Denver defense are going to have a real test ahead of them.

The ultimate factor that will decide this game is Denver’s ability to rally late in games. Despite any concerns and troubles they’ve had this season and last, Tierney continues to find ways bringing the squad together for perfect final minutes. It’s those final minutes that have been crucial to Denver’s 19-game win streak. Though the team works diligently on cultivating a steady, dependable performance, wins are wins and Denver is the type of team that terrifies opponents with their ability to finish strong.

Gametime is 1pm MDT in Denver, Colorado on Saturday at the Peter Barton Lacrosse Stadium.