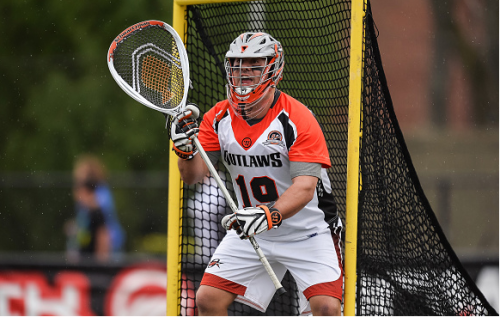 The Denver Outlaws defeated the Rochester Rattlers by a score of 22-21 in an overtime shootout in the Mile High City. Dave Lawson led the Rattlers with five points (4 G, 1 A). The Outlaws got major contributions from John Grant (7 G, 1 A), Jeremy Sieverts (5 G, 1 A, 1 2-PT) who both totaled eight points on the evening, and Mike Bocklet chipped in six points of his own (3 G, 3 A).

Let’s get this out of the way early. On an evening billed as “Grateful Dead” night, this Deadhead had high hopes for this game. The product on the field didn’t disappoint but there was an egregious lack of Grateful Dead music during the game. About half of the goals got a “Touch of Gray” audio clip. They played parts of “Scarlet Begonias” a couple of times, and we got an “Estimated Prophet” clip during the in-stadium spotlight on Jesse Schwartzman (who is a huge Phish fan), as it’s apparently his favorite Dead tune. No “Truckin’,” no “Shakedown Street,” no “Sugar Magnolia.” Denver’s uniforms made use of the Steal Your Face logo, but the numbers were a bit hard to read on the front. Rochester’s uniforms were just a generic tie-dye, which isn’t even something that is Dead specific. To say they underwhelmed would be a good place to start.

But I digress. On to the game.

John Grant started the scoring just over a minute into the game, but Rochester didn’t need much time to build a 4-1 lead, including a 2-point bomb from Justin Turri. Denver rallied last in the first, netting two more to end the frame down 4-3.

Denver broke open the floodgates in the second quarter, scoring six unanswered goals to start the quarter (with a 8-0 streak stretching back to the first). Randy Staats stopped the run with his first MLL goal. Staats played very well running out of the box all night and his shot placement was strong throughout. Staats’ goal was followed by an EMO tally from Jordan Wolf. The Rattlers went 2-for-4 on the extra man on the evening.

Denver was up 10-6 with the quarter winding down, but Rochester netted two goals in the final minute with both Dave Lawson and Randy Staats getting their seconds goals on the night.

Coming out of the half, Denver launched into another big run, scoring six unanswered goals with Mike Bocklet and Jeremy Sieverts each scoring back-to-back goals to start and end the run, respectively. Rochester’s Joel White netted a goal off a quick restart, followed by Turri’s second 2-pointer of the evening to bring the score to 16-11. Jordan MacIntosh would add one more before the stanza ended.

Pandemonium broke out in the fourth quarter. Jesse Schwartzman, who didn’t come out of the gates very strong in the first, regained his old form in the second and third, but seemed to come unraveled in the fourth. Denver Head Coach B. J. O’Hara stood behind his starting net-minder after the game, but many in the stands were hoping Dillon Ward might be able to staunch the bleeding.

Lawson completed a hat trick to start off the fourth. Denver responded with a trio of goals from Grant, Jeremy Noble, and Sieverts. Denver sat on a 19-13 lead, but the Rattlers tried to bleed the Outlaws white. Five straight goals, including a 2-pointer from John LoCascio tied the game at 19 with about 3:30 remaining in the game. Sieverts broke the tied open with 1:30 remaining, draining a 2-pointer. (Seriously, despite the career day that Sieverts had not a single “Terrapin Station” echoed through the stadium for the former Maryland Terp.) Although the game seemed to be in hand, with four ticks left on the clock Jordan MacIntosh drilled a 2-pointer, the fourth goal from beyond the arch that Schwartzman allowed on the night, to send the game to OT.

Notes:
• Rochester’s starting attack, of Jordan Wolf (1 G, 2 A), Jeremy Boltus, and Kevin Rice (1 A) were held to four points total.
• Dillon Roy did a great job of shutting down Wolf for most of the game, holding him to his lowest scoring total of the year.
• Drew Snider, who led Denver in scoring going into the game was held scoreless on the evening.
• Denver did not dress a faceoff specialist. The Outlaws were atrocious at the faceoff X and ran three poles at the face at times, with Michael Simon performing the bulk of the faceoff duties. He went 11-for-36 on the night, but none of the Outlaws’ drawmen appeared to win a clean clamp on the night. At times, they outright ceded the clamp, opting instead for a 3-on-3 scrum.
• Despite what the box score says, Geoff Snider did not play in the game. I received Twitter messages that the announcers were calling out Snider’s name as well. Noah Molnar wore #35 for the game, switching, apparently, from #12. Molnar had an assist in the game.
• Matt Bocklet scored his first goal of the season. With that goal all three Bocklet brothers not only scored for Denver this year, but all three also scored goals in the game. Chris (1 G), Matt (1 G), Mike (3 G, 3 A).