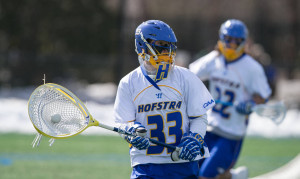 If there were any people who thought Hofstra’s win over UNC last week was “pure luck,” then this week’s game put those doubts to rest. The Pride welcomed in the Tigers of Princeton University, and defended their home field with a 11-10 overtime victory.

“I am so proud of the guys in the white jerseys today that I cannot put into words that would do it justice,” head coach Seth Tierney.

The win left a lot of people speechless, even the Tigers. Some people thought Princeton would be the team to defeat Hofstra and remind everyone that Hofstra was nothing special. After all, the Tigers have beaten the Pride every season since 2012. The victory ended the Tiger’s four-season win streak against the Pride.

Leading the way for the Pride was junior attacker Josh Byrne. The transfer from Nassau Community College scored four goals against the Tar Heels, and in this game, he did better by scoring five goals. Byrne was quick to credit his success to his teammates.

“I am very lucky with guys around me. They feed off me a lot and gave me the ball a lot and it ends up really well.”

Hofstra had to battle to get the win, though. They found themselves down early in the first quarter 3-0 before Trevor Kupecky, Korey Hendrickson, and Byrne scored to knot the game up at 3-3 before the end of the first quarter. Princeton once again got off to a hot start in the second quarter with three goals, but this time Byrne’s two goals was all the offense the Pride could manage before halftime.

The Pride came out onto the field for the second half ready to take control, and that’s exactly what they did. Sam Llinares and Dylan Alderman scored a goal for the Pride in the third quarter to get them tied at 7-7. Then it was Brian von Bargen’s and Byrne’s turn to go on the offensive, as they opened the fourth quarter with two goals to give Hofstra their first lead of the game, 9-7. Von Bargen scored his second goal in the fourth, but Princeton forced the game to overtime with three goals. As overtime went on, it seemed that more time was needed to decide a winner, but Byrne scored his fifth goal to give Hofstra the 11-10 victory.

The Pride will need to take advantage of whatever rest they can get this weekend, because they have two games this week, the first game against NJIT on Tuesday, March 1, and the second against Georgetown on Saturday, March 5. Both games will be at Shuart Stadium.