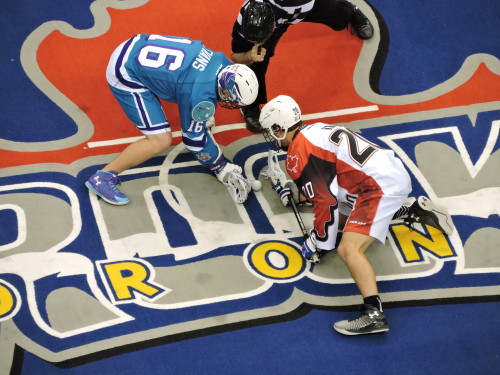 Everything’s coming up Rosey for the Toronto Rock. In avenging two early season losses they took down the Rochester Knighthawks on Saturday at the Air Canada Centre 17-6. The Rock still sit last in the NLL but are now on a two game winning streak with three more home games to play before they hit the road again. The Knighthawks fall to 3-4 and sit in fourth place in the East Division.

For the second consecutive game goaltender Nick Rose was lights out, and named first star of the game in a 52 save effort, but it was the total team effort that really stole the show. An 11 point night from Rob Hellyer and a sock trick from Kasey Biernes were the offensive highlights. Defensively, the team shone as constant threats like Cody Jamieson and Dan Dawson were completely ineffective in the offensive zone. Toronto kept penalties to a minimum and dominated in the face-off circle.

“That feels good to be able to help the team but we’re just focused on keeping this rolling here,” Rose said. “We’ve played well even before our win last week so we feel like we can play with anybody.”

Head coach John Lovell was pleased with his entire team.

“That’s as complete a game as we’ve played and that’s what we’ve been looking for,” he said post game. “Just a consistent effort throughout for 60 minutes so that’s as good as it gets.”

Players like Billy Hostrawser, Jamie Batson, and Scott Johnston were workhorses on the back end, taking away good chances and throwing the body to produce loose ball opportunities.

“It’s been something that we’ve been working at,” Lovell said of his defense. “I think this morning at shoot around it’s as confident as I’ve seen our guys. They were focused and determined about what they had to do tonight and they just carried it out.”

“That’s the best our defense [has played],” he said. “We kept them out. We let the people shoot that we wanted to shoot as part of our game plan and that was obviously effective. Matty (Matt Sawyer) made some adjustments and thats how we have to beat teams like this, you have to make adjustments and take away their best shooters. You can tell, we took away Jammer, Dawson, and we made their left side shoot. And that made Rosey able to play as good as he is because he [was able to] focus on that side, rather than going laterally back and forth.”

The Rock took a quick 2-0 lead in the first quarter before Stephen Keogh popped one by Rose. Toronto then went on a five goal tear to lead 7-1 after the first. Rochester scored first in the second but Toronto added four goals for an 11-2 lead at the half. It was the best opening half the Rock have played in 2016.

Knighthawks goaltender Matt Vinc was pulled in the first after letting in seven goals on 15 shots. Angus Goodleaf played the rest of the game and made 26 saves.

The Rock took advantage of a downtrodden Knighthawk team and capitalized on eight of ten power play chances; seven of those goals came after the Rock’s big first quarter outburst as the Knighthawks unravelled. Dawson took an uncharacteristic head-butting penalty in the third as frustration boiled over.

“They’re a load to handle any night you’re playing against them,” Rose said of Jamieson and Dawson. “For our defense to do the job that they did… was a pretty special effort here tonight.”

In the third, Rochester again scored only once, with Toronto adding two more for a 13-3 lead. The Knighthawks tried to mount a comeback in the fourth quarter but a trio of penalties by captain Sid Smith negated that plan. They managed three but couldn’t compete with the Rock’s final four.

Biernes’ teammates pushed him to the front of their post game on floor celebration so he could take a moment to revel in his sock trick.

“[Leblanc] said he was gonna take his socks off, but I was waiting for it and I still haven’t seen it,” he chuckled.

Biernes said he wasn’t expecting to have such a great game.

“At shoot around this morning I was struggling to hit the net so I was kind of worried about tonight but I guess when luck is on your side it’s amazing what happens,” he said. “We had a bad warmup and we had a little talk before we went out for the game. We were all a little worried to get out there but when the first couple shots fell it was nice to get the monkey off our back early and keep on rolling from there.”

Biernes wasn’t just getting lucky with whatever he tossed at the net; he was six for seven with his shots and was taking them at all angles and in all situations. He had three power play goals, one shorthanded, and one with an extra attacker.

“It’s a game of chance and luck I was trying to get a bit more of a gap between players,” he said. “I had a little bit of variety in my shot; I had one in the middle, had a quick stick, actually had a rebound for the first time in a long time so I think it was kind of neat that it wasn’t the same thing and it’s nice to get a bit of bouncer every once in awhile.”

Biernes led the Rock offense with his six goals and one assist. Hellyer had three goals and eight assists, Stephan Leblanc three and five, and Josh Sanderson three and four. Colin Doyle added one goal and eight assists. Rookie Dan Lintner continues to impress as he chipped in a goal and three helpers. Brock Sorensen had two assists and Brodie Merrill one.

Biernes said a change in perspective and strategy helped the Rock be so dominant on Saturday.

“Tonight our goal was to be unpredictable,” he said. “Since our first couple of games against [Rochester] we had a pretty set schedule in what we were doing. Tonight we let our professionalism and experience take over and if we kinda change it up all the time it makes us difficult to stop. We had goals from the left side, goals from the right side, and that’s how you beat teams in this league because you can shut down one or two people but it’s difficult to shut down six.”

Lovell is happy with the wins but knows there’s still a long way to go to crawl up the standings.

“Every time I wake up and look at the standings it bothers me that one more win would make a big difference to us. Two, we could be right at the top,” he said. “Losing all those division games has put us in a big hole but what we’re looking for now is just to get to three.”