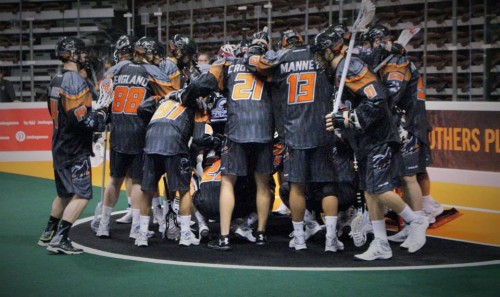 The month of September is like Christmas to all potential National Lacrosse League prospects.  But for Quinn Powless it was the matter of who would pick him and when.  Then the announcement came, Quinn Powless was now a member of the New England Black Wolves (first round, eighth overall).

He would now be playing along side of Kevin Crowley, Pat Saunders, Kevin and Kyle Buchanan and would add speed and a lot of excitement to the Wolves offense.  In his first game against the Buffalo Bandits Powless had a goal and two assists in a 12-8 Black Wolves victory.  In game two, Powless chipped in with three assists in a 17-7 rout of the Knighthawks and the Wolves were howling at 2-0.  Then came game three versus the Swarm.

I spoke with a couple of his teammates when the Black Wolves visited Rochester in April, and they all echoed the same thing: when Quinn returns next season, he will be turning some heads.  I spoke with Powless that night and he stated he can not wait to get back into action.

This time when he takes the floor he will have a new head coach, as well as a new star along side of him.  Garrett Billings was acquired at the trade deadline for Kevin Crowley, and he will also have one of the best transition players with him in Andrew Suitor.  If the team stays as is, and not have a large turnover, this team could make an impact in 2016.

Once Powless went down, the Black Wolves went 2-14 to finish the season at 4-14.   Powless is obviously the young talent this organization wants to build around, and in order to succeed they must keep these players together.

If Powless rehabs anything like he plays the game, there is no doubt this young star will be making a major impact next season.