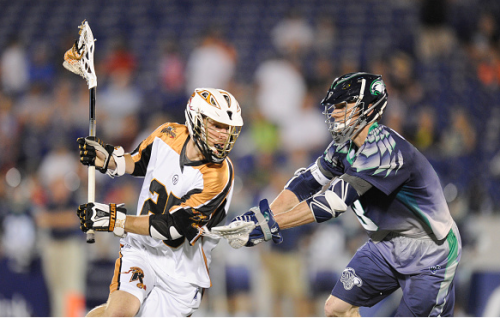 The Rochester Rattlers (5 – 3) travel to Colorado to face the Denver Outlaws (4 – 4) this Saturday, June 20th at Sports Authority Field at Mile High Fresh for the second overall meeting between the two clubs in the regular season. Fresh off a great outing from the MLL All-Star Games, the Rattlers, who now lead the league in shots on goal, will look to sweep the defending MLL Champions as both teams head into the second half of the season with preparations for the post-season in mind.

In the first meeting in upstate NY, a shell-shocked 2-2 Rattlers had a fantastic 15-12 outing against the then 2-1 Outlaws. Starting in the last seconds of the third and into the fourth, Rochester scored three straight to match Denver’s three goals that tied the game heading into the final fifteen minutes. The Outlaws and the Rattlers picked up the offense in the 4th Quarter, with both teams matching offense for offense. However, led by league-leading scorer Jordan Wolf’s three goals and two assists, the Rattlers ultimately won by the end of regulation.

The significance of that game was highlighted into what was a transition for the Rattlers as the season went on. Not only was that match a big rematch win of the 2014 MLL Championship game, but it was the first game in which Rochester began to put the pieces together to end up tied in second place heading into the All-Star break. Signs of last year’s form began to show, with the midfield recently welcoming back Jordan MacIntosh, fresh from the NLL season, though the defense did not come together until a week or so before the MLL’s All-Star mid-point, which saw them, with the lead’s leading man-down defense, limiting Boston to just six goals in their most dominant game to date this year.

On the other side, Denver comes off a two goal losing streak, dropping games to both Ohio and Chesapeake. While there is no shortage of offense for the Outlaws, face-off specialist Anthony Kelly and All-World goalie Jessie Schwartzman’s inconsistent performances have proven problematic for the defending champions. Despite this, the game will be a test for both teams, as Denver is quite difficult to defeat at home.

Michael Bocklet, in particular, will post a challenge for the Rattlers’ defense. Coming off a four goal performance two weeks ago in the losing effort against Ohio, the most recent rising star in Denver’s loaded team, along with John Grant Jr.’s four point performance and midfielder Jeremy Sievert’s four goal performance in the game against Chesapeake, will be a challenging offense for the Rattlers to defend against, particularly on the map up, where Denver leads Major League Lacrosse in offense on the extra man.