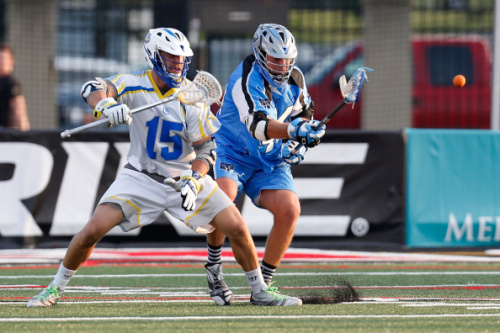 The MLL all-star break has come to a close and Saturday night lacrosse is upon us once again as Ohio and Chesapeake are set to square off for the second time this season.

The Machine (5-3) play host to the Bayhawks (4-4) this time around at Selby Stadium in Delaware, Ohio.

It won’t be an easy task to upend Ohio, who have won their last four games. Chesapeake stopped their losing streak at three against Denver in their last contest before the festivities in Houston.

Despite midfielder Peter Baum’s absence the past three games due to injury, the Machine have kept up the scoring thanks to Tom Schreiber (14 goals, 19 assists), who is fifth in the league in points, Marcus Holman (22 goals, 4 assists), fourth in the league in goals, and Kyle Harrison (12 goals, 2 assists).

In their past three games, Schreiber has amassed four goals and 12 assists while Holman has cashed in 11 goals, adding an assist in those games as well.

While Baum, Jimmy Dailey and Schreiber potted three goals in that 12-9 win on May 3, it was the defense and goaltender Brian Phipps that shined, who made 14 saves along the way.

The Chesapeake offense has been Jekyll and Hyde all season, but attackman Joe Walters showed that he can make a big impact in their 15-12 win over Denver. The 30-year-old provided four goals and four assists in just his second game of the season.

In terms of the other offensive threats that the Bayhawks are throwing at the Machine are leading scorer Matt Danowski (6 goals, 15 assists), Jack Rice (14 goals), and Ben Rubeor (11 goals, 2 assists).

Adam Rand, who was recently picked up off of waivers, will provide an interesting matchup with Ohio’s faceoff wizard in Greg Puskuldjian.

Rand went 12-27 against Denver’s Anthony Kelly in his first performance of the season.

Puskuldjian, who has secured a firm grasp on the lead faceoff position for the Machine, is winning 54% of his draws.

Tyler Fiorito will man the pipes once again for the Bayhawks. He’s giving up 12.25 goals per game and has a .572 save percentage.

His counterpart in Phipps has a goals against average of 12 and a .545 save percentage.