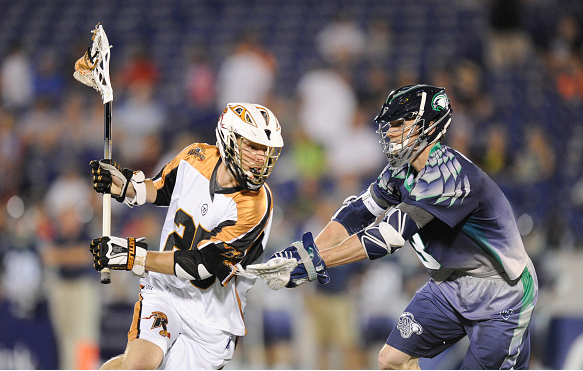 In one of their most action-packed home games of the 2015 MLL season, the Rochester Rattlers (7 – 5) defeated the Chesapeake Bayhawks (5 – 7), in front of a good crowd in Brockport, NY. A strong first and fourth quarter led by Dave Lawson, who had five points, Kevin Rice, who had a hat trick including the game winner, and another great game by Mark Matthews’ who had his own 3 goals help secure Rochester’s victory after a relentless Chesapeake comeback that ultimately ended 14 – 13.

Things started off well for Chesapeake. Midfielder Matt Abbott got the ball rolling early after a feed from Joe Walters, who would later score himself on the power play to get within 3, after Rochester went on a short three goal run with tallies by Rice, Staats, and Lawson. By halftime, Rochester led 7 – 6, with Chesapeake battling back after a three goal opening of the second with a small run of their own, led by Danowki. Matt Danowski ultimately ended the game with a season high seven points.

The third quarter was a back and forth affair with both squads scoring three goals. Rochester, however, dominated the face-offs, and that is what ultimately kept them in the game. Mike Poppleton did excellent, ending the game 19 – 31, with groundballs and even a goal off the face-off for one of Rochester’s three goals that quarter. It was then in the beginning of the fourth that Rochester began to really pull away. Goals from Staats, who had two of what was seemingly the most important goals, and Lawson unassisted would bring Rochester to a 13 – 9 dominating performance. Then, the defense collapsed. Chesapeake would go on a four goal tear, led by Joe Walters and Matt Danowski, which ultimately tied the game 13 all, which was then decided by Kevin Rice’s game winning goal with under five minutes left.

It is here that Rochester showcased a different offense, yet glimpses of it showed throughout. In trying to get Jordan Wolf open looks, Rochester kept the offense of him and Rice with Matthews,  but would alternate having Wolf go up-top and Kevin staying down-low and vice versa. A peculiar tactic that gave one of the few Jordan Wolf goals from up top all season, coming at the second quarter, the rotation allowed for what I was waiting for since he signed onto the team: the emergence of Kevin Rice. The All-American from Syracuse who ended his No. 2 jersey wearing career with 222 points, No. 7 finally looked comfortable in the MLL. Scoring a hat-trick on the day, Rice was finally able to do most of his work from behind. Since Wolf, who was seemingly stuck behind the goal all season, was moving around on different parts of the field, Rice was able to do what he did at Syracuse, pick apart and unravel a defense. No greater example of this is shown than in the very first goal he scored, where he took his defender to the rack, with two strong dodges from X, going to GLO, and scoring over both him and Tyler Fiorito to tie up the game 2 – 2. That’s a lot of 2s in one paragraph.

With Mike Manley out for the season, and a Rattlers’ defense that, despite allowing under fifteen goals for the first time in three weeks, still looking out of sorts, another emerging player is just what Coach Soudan needs. The biggest question mark going forward is if the defense can hold up against quality offenses in the post. Rochester cannot win a post-season game if even a struggling team can go on a four-goal run late in the fourth at home, and only hang onto a lead. John Galloway had a good 17-save game, yet this was not a game against Denver or Ohio. This was ultimately a game to prove that they can be anywhere near their great 13 – 6 game against Boston earlier in the season. They are not.