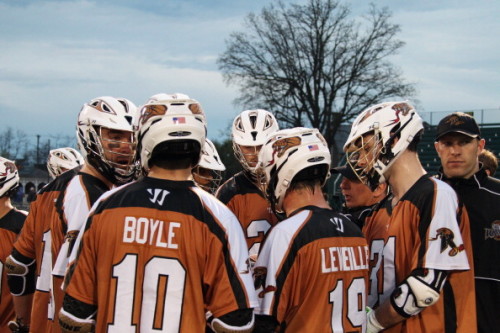 The Machine got the scoring started 10 seconds into the game thanks to Brian Karalunas’ first goal of the season. Tom Schreiber and Kyle Harrison provided goals to put the home team up 3-0 at the 8:25 mark of the first quarter.

Michael Lazore and Mark Matthews tallied goals to cut the Machine lead to one but a goal by Jimmy Bitter put Ohio back up by two after 15 minutes of play.

In the second quarter, Bitter would score two more times complimented by two Marcus Holman goals, giving Ohio an 8-3 lead heading into the second half.

And then the Rattler offense woke up.

Saturday provided Matthews’ with his second game of the season, his first coming last week against the Machine in a 15-12 loss.

He led Rochester in scoring with four goals and an assist this time around.

A five to one scoring run for the Rattlers though 7:24 in the fourth quarter would prove to be costly, as Ohio had to play catch up for the remainder of the afternoon.

Bitter’s game-high sixth and final goal of the game momentarily stopped the bleeding at the 10:28 mark of the final frame.

The former North Carolina Tar Heel had seven goals through three games played heading into the matchup with Rochester.

However, Kevin Rice’s sixth goal of the season with 1:37 remaining to put the Rattlers up 16-13 would be the backbreaker.

Tom Schreiber’s second goal of the game, this one a two-pointer with 25 seconds left cut the lead to one, but the Ohio comeback would fall short as they would lose the ensuing faceoff, where Rochester ran off the rest of the clock.

Goaltending was a big story in central Ohio on Saturday, as Ohio’s Brian Phipps and Rochester’s John Galloway put on a show for the 2,218 in attendance.

Ohio was also surprisingly able to keep things close given the faceoff numbers, which were 25-33 in favor of their counterpart.

Ohio and Rochester are now tied for third place in the league, sitting three games behind first place New York with three games remaining in the season for each team.