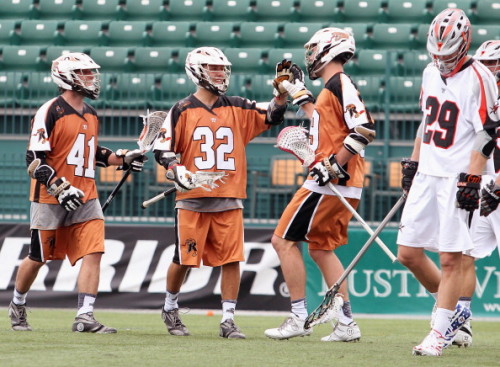 The Charlotte Hounds on Friday night lost their third-straight game, falling 18-10 on the road to the Rochester Rattlers. Kyle Denhoff and Jordan Wolf lead the way for the Rattlers with four goals each. Denhoff, a Rochester native, earned Coca-Cola Player of the Game honors. Meanwhile, the Hounds were lead by Joey Sankey with three goals and Mike Chanenchuk with two.

The game opened with 4:30 of scoreless play before the Rattlers put two quick goals on the board. Chanenchuk answered for the Hounds, working from behind the cage to beat John Galloway over his left shoulder. The Rattlers got one back before Chanenchuk struck again to keep the Hounds within one. One minute later, Hounds goalie Jack Runkel came up with a save and cleared the ball to Michael Ehrhardt, who found Kevin Cunningham in front to tie the game at 3.

Will Haus opened the scoring in the second quarter with a wrap-around goal to give the visitors their only lead of the game, 4-3. After a 14-minute scoring drought, the Rattlers net back-to-back tallies to regain their one-goal advantage. With less than five minutes remaining in the half, Sankey snuck a shot past Galloway to knot the game at 5. But the Rattlers closed the half with four straight goals, including three from Wolf.

Momentum stayed with the home team coming out of the half, as Matt Lazore ripped a two-point goal in the opening 30 seconds to push the Rattlers advantage to 11-5. The Hounds finally started to find their rhythm and rattled off three-straight goals, including two from Sankey, to close the gap at four with 3:45 left in the third. But the Rattlers responded with a three-goal run of their own, giving the home team a 14-8 advantage going into the final quarter.

Mike Poppleton won the opening faceoff in the fourth, with John LoCascio on the wing to scoop up the loose ball. LoCascio quickly dished the ball to Kevin Rice who finished easily. Denhoff added his third goal for the Rattlers before Hounds rookie Matt Clarkson recorded his first career MLL goal, making it 16-9 in favor of the home team. The teams traded goals before Denhoff sealed the 18-10 victory with a laser from long range.

The Hounds (3-10) next week will close out their 2015 campaign in Annapolis, Md. against the Chesapeake Bayhawks (5-8). The Bayhawks are coming off a 9-8 overtime loss to the Boston Cannons on Thursday night. Faceoff is scheduled for 7:00pm at Navy Marine Corps Memorial Stadium on Saturday, July 25.