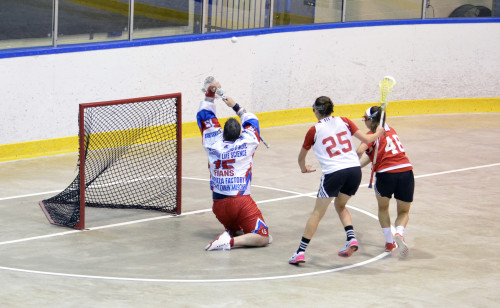 During his Peterborough Lakers game versus the Brooklin Redmen at Iroquois Park Sports Centre in Whitby, members of Canada’s under 19 women’s field lacrosse team were introduced and then played an intra-squad scrimmage at intermission.

Team Canada will play in the quadrennial event beginning July 23 in Edinburgh, Scotland. Members of the team are from all over Ontario and British Columbia, and include several Canadians now living in the USA.

While the Redmen took their much deserved break at intermission (down 5-0 at that point), many of the Lakers emerged from their dressing room to stand on the sidelines and cheer on the women as they played.

Two members of Team Canada are from Peterborough – Erica Evans and Jocelyne Lemay – and are familiar to those in the Peterborough lacrosse community. Erica Evans is the cousin of the Lakers’ Scott, Shawn, and Turner.

The women were divided into Team White and Team Red, but only had one goaltender between the two. Seeing this, Scott Evans jumped over the boards, sans helmet or gloves, and into the empty net.

Chuckling after the game, Evans said the last time he’d played field lacrosse was at the University of Delaware, but that he had played goaltender in hockey all through his youth.

“I played in the Peterborough Petes minor system,” he said, “and in house league back in the day I always took a turn playing net – and always in the back yard!”

Evans let the first few shots go by as he accustomed himself to the different pace of the women’s field game (played in a box setting for this scrimmage). After he settled in, however, he showed off his quick reflexes that fans see on offense, and that often result in goals going past opposing tenders. One save was a highlight reel diving deflection that made the rounds on social media.

Asked whether he was prompted to jump in goal by his teammates, Evans said that it wasn’t anyone else’s idea.

The Lakers watching cheered on Evans, although as there tends to be with close knit friends, also some jeering, with some shouts of “Aim for his head, girls!” heard from his teammates.

“It was fun,” Evans said. “I couldn’t hear much, I was just trying to get the ball to number 11, Erica, see if we could get an Evans from Evans goal.” That phenomenon happens often in the MSL, with three family members in the Lakers offensive unit, although the more rare Evans from Evans and Evans has only happened twice so far.

Evans was happy with his play in the scrimmage.

“I got a pretty good ovation when I made that save so I must have done something right,” he chuckled. Even the Brooklin fans gave him a cheer for his good sportsmanship. While the Lakers and Redmen are no fans of each other on the floor, everyone in attendance was supporting Team Canada.

Evans tweeted a thank you to the women after the game – “Thanks women under19 team Canada for realizing my dream to play for team canada @amERICAnEVANS #backupgoalie?”