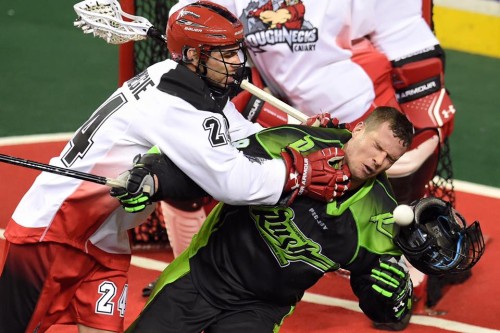 The Saskatchewan Rush watched the NLL trade deadline come and go without making any changes to their lineup for the remainder of the 2016 NLL season. GM Derek Keenan feels his lineup is as good as any in the league and rightly so. Going into tonight’s game against the Calgary Roughnecks the Rush have won five in a row, including a weekend sweep of the Toronto Rock and sit tied with the Colorado Mammoth for top spot in the NLL.

The Rush will face their cross provincial rivals full of confidence and with the opportunity to sweep the season series, something they haven’t done in quite a while. With a victory the Rush will also clinch a home playoff birth and the chance to move ahead of the Mammoth.

The Rush are playing solid on all facets of their game and their penalty kill has been on fire lately with a league leading 13 shorthanded goals.

The game will feature two of the best goalies in the league. Aaron Bold leads all others with a 10.55 GAA and Calgary’s Poulin is third with 10.87 GAA. With Calgary averaging over 14 goals per game in their last four matches and Saskatchewan with a 24 goal single game output a couple weeks back, there is no guarantee that these goalie will be able to keep the game low-scoring affair.

Calgary’s Curtis Dickson is two goals shy of reaching the 50-goal plateau, while Zack Greer leads the Rush with 31.

The Roughnecks need a victory to keep ahead of the Vancouver Stealth, who still have a mathematical chance to make the playoffs.

With so much on the line, this should be a rough and tough affair. Game time is 8:30pm EST at what is expected to be a sold out SaskTel Centre.