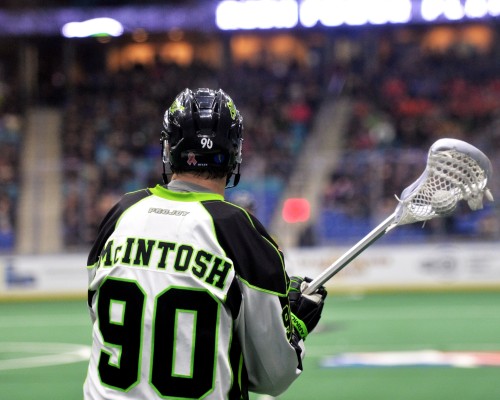 The Edmonton Rush came out on fire Friday Night at SaskTel Centre in front of 11,042 boisterous fans. The SaskTel faithful had plenty to cheer about as their hometown heroes jumped out to a commanding 8-1 lead and then hung on to defeat the Rochester Knighthawks 11-8.

Rochester scored the games first goal from Joe Walters 2:18 into the game, but it would be all downhill for the remainder of the opening quarter. The Rush powerhouse offence who is known for scoring goals in bunches came to life and in a blink of an eye was leading 7-1. They got goals from their usual top scorers Mark Matthews, Ben McIntosh, Zack Greer, Robert Church and one from defensive specialist Jeff Cornwall. None had a big productive night, but instead the scoring was spread throughout the line up.

In was touted to be an epic battle of the leagues two best goalies, but it didn’t look like Matt Vinc was going to be able to hold up his end of the bargain as he was chased from the net after the fifth Saskatchewan goal and replaced by backup Angus Goodleaf for 31 seconds until the Rush slipped an easy one by him on the only shot he would face. Vinc came back in and after letting in a couple more would eventually settle down and give his team a solid performance.

It must have been quite the half time speech from head coach Mike Hasen because the Knighthawks came out for the second half and just like their star goalie, would play a much more inspired controlled game out-scoring the Rush 2-0 in the third quarter on goals from Sid Smith and Joe Resetarits.

The K-Hawks made the game interesting as they pulled within two with 5 minutes to play on a couple of Dan Dawson goals but the Rush got an unassisted goal awarded to Kyle Rubisch after Rochester goalie Vinc was given a too many men penalty when he left the net for the bench but tried to return to stop Rubisch .

With the victory Saskatchewan now sits at 4-2 while Rochester falls to 3-3. The Rush will continue their home stand and host the Buffalo Bandits next Friday and then hop a flight to Calgary to take on the Roughnecks on Sunday. Rochester moves on to play the Toronto Rock next Saturday.